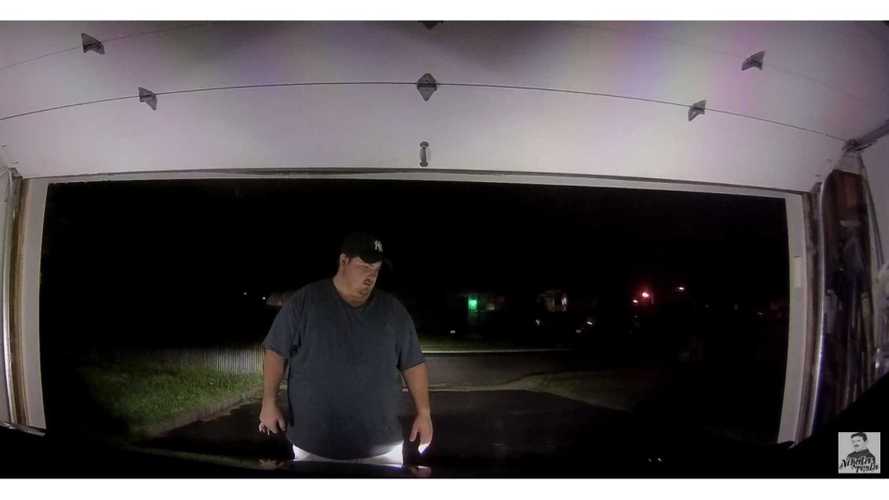 Sometimes too much technology can spawn dire results, like when your garage door closes on your Tesla Model X.

Unfortunately, the video is not very telling. It's dark and hard to really understand what's going on. However, YouTuber and Tesla Model X owner (Age of Tesla) shared details via the comment section.

Apparently, his vehicle's HomeLink system somehow triggered the garage door to close at precisely the same time as he was summoning the vehicle forward with the newly updated key fob Summon Mode. As you can sorta see from the picture below, it resulted in a collision. Fortunately, no one was hurt and the garage door likely suffered considerably more damage than the Model X. Too bad the garage door is a much cheaper fix. The YouTuber explained the situation, replying to a commenter on the site:

Did the Tesla Model X or the garage door suffer greater damage?

"the car closed the door. The first time I sent it back it wasn't in the garage all the way. So I did it again. Then it was too close to my wall so i summoned it forward using my body to stop where it needed. That's when the car thought I was the garage door and sent the command."

As you can see from the video, he summoned it once and it was continuing to chime and turn its lights on and off when suddenly the garage door came down. It looks as though he was still in the process of summoning the vehicle, or at least the Model X was still in the midst of its maneuver. One would assume that he wouldn't have initiated the garage door to close during the summon. So, it makes sense that something else caused the door to close on its own. He told Teslarati:

“I know a recent update was done so I attempted it for the first time at that moment and was happy to see it working again until it crashed into my garage.”

Other commenters were skeptical about the YouTuber's story. Reddit user Rrr Ggg wrote:

"Seems like summon was initiated and paused (because he was in front of it) but it was still active, and then as he walked out of the path of the vehicle (before the door could be sensed) it continued forward ... because it was still active. Maybe he thought he initiated a stop with the fob, but it didn't work or he didn't press it hard enough."

"SOMETHINGS REAL FISHY HERE. THE CAR IS STILL CHIMING AND TURNING IT'S LIGHTS ON AND OFF SO WHY CLOSE THE DOOR IF YOU WEREN'T CERTAIN IT HAD FINISHED THE CYCLE? WERE FIDDLING AROUND WITH THE FOB IN YOUR POCKET?"

As Teslarati pointed out, there are many avid Tesla defenders that are quick to attack people like this when something goes wrong and they share it. If there are issues with the software that could potentially lead to a collision or even an injury, it's of the utmost importance for people to apprise Tesla.

Teslarati learned from the YouTuber that he's not blaming the automaker for the accident. He never said anything in the comment section about this being Tesla's fault. He did, however, contact Tesla to make them aware of any potential issues with the software update.

After using summon to put the car in the garage. I used it again to get it away from the back wall. Never thought this would happen.