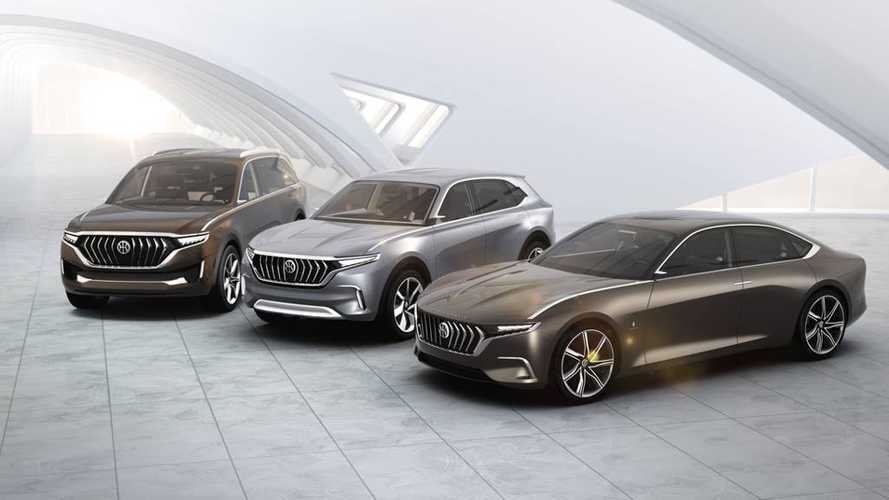 These concepts use a turbine as a range extender and can allegedly travel over 621 miles on a charge.

Pininfarina arrived at this year’s Auto Shanghai show with a trio of green concepts that imagine two flavors of crossovers and a luxury sedan. The famous Italian design house created these show vehicles on behalf of its client Hybrid Kinetic Group.

The five-seat K550 and seven-passenger K750 concepts are essentially two takes on the same idea. Both feature large grilles with vertical slats, and headlights that integrate into them. Raked windshields make them looks quite aerodynamic, but the larger model has a higher roof for fitting the additional people inside. The looks is similar again at the back where both models feature skinny LED taillights.

The sedan in Shanghai is the same H600 from the Geneva Motor Show. The four-door shares the aesthetic of its CUV siblings but adapts the look for a sporty sedan. It’s arguably the most attractive of the trio.

All of these concepts combine electric drive with a micro-turbine generator range extender. Pininfarina and Hybrid Kinetic Group claim the high-tech drivetrain would offer an energy recovery rate over 30 percent and allow for a range in excess of 621 miles (1,000 kilometers) in the somewhat optimistic New European Driving Cycle test. The micro-turbine generators have an expected lifespan of 50,000 hours and maintenance is necessary every 10,000 hours.

Vehicles like these concepts might actually see the road someday. Pininfarina has an agreement with Hybrid Kinetic Group to develop an electric car from concept through validation for production over the course of 46 months.

Pininfarina has said that the H600 sedan could be ready for sale in China and the United States by 2020. It’ll reportedly share 90 percent of the look from the concept. The Italians will build the initial examples but will eventually shift production to China. The production model will also reportedly retain the micro turbine generation range extender.

On the heels of the world debut of the H600 at the Geneva Motor Show in March, the unveiling of two electric drive SUV concept cars highlights Hybrid Kinetic Group’s passion and endeavor towards environmental protection and clean energy vehicle development. The three HK cars are all equipped with micro-turbine generator range extenders and super batteries. All three vehicles are equipped with highly efficient, energy conserving and environmentally friendly electric drivetrain systems that will help build emission-free cities.

The whole range of cars is designed following the concept of elegance, purity and innovation. The same smooth exterior lines and fine interior details show the same family DNA; the powerful functions, enhanced ergonomics, advanced materials and latest technology embody Hybrid Kinetic Group’s philosophy of car making; the clean and simple design language present a timeless masterpiece. The seamless integration of design and engineering give these cars both luxury comfort and top-notch performance.

"We are very proud to present in Shanghai a new family of cars born from the collaboration between Pininfarina and Hybrid Kinetic Group - explains the CEO Silvio Pietro Angori. - These three cars express the Pininfarina know-how and skills which are perfect for the Chinese market: style research and development aimed at defining a timeless beauty in the best tradition of Italian style. Moreover, we give shape to HK technology combining design to environmental sustainability”.

Micro-turbine generator ranges boast longevity. The expected lifespan is 50,000 hours and maintenance is only required every 10,000 hours; the super batteries have a life span of 50,000 DOD charging cycles. The long lifespan of range extenders, batteries and motors allows them to be recycled and reused. This not just lowers cost but also reduces waste and environment impact, which helps create a more harmonious society which is the perfect embodiment of Hybrid Kinetic Group’s environment principles.

The Shanghai Auto Show comes a few weeks after the announcement of the signing of a trade agreement between Pininfarina and Hybrid Kinetic Group Limited. According to the agreement, Pininfarina will support Hybrid Kinetic in the turnkey development of an electric car from the styling concept and development of the vehicle to the engineering development and virtual and physical validation for series production. The collaboration agreement, worth about 65 Million €, will have a total duration of 46 months.

"Hybrid Kinetic - adds Angori - has chosen to cooperate with the Pininfarina Group thanks to the set of skills and technologies in the field of sustainable mobility that we have developed over several years. This agreement confirms the primacy of our Company in the world of automotive design, engineering and production of small series at a time of great change in the automotive world”.

Pininfarina was the first Italian design house to provide styling and engineering services to Chinese carmakers since 1996. Since then, Pininfarina has expanded its range of activities by developing partnerships with manufacturers like AviChina (Hafei), Chery, Changfeng, Brilliance, BAIC, JAC and others, for which commercially successful vehicles have been designed, such as the DX7, first fruit of the collaboration between Pininfarina and South East Motor-SEM, then followed in 2016 by the DX3 concept, a compact SUV that anticipates the upcoming production car, also developed by Pininfarina in Italy.

In 2010 Pininfarina Automotive Engineering Shanghai (PAES) was established with the aim of locating a satellite design development in Shanghai, automotive strategic site for the Asian region. Today PAES is an established outpost of commercial development and design creation that, under the guidance of Simone Tassi (General Manager) and supervision from Italy of the Design Director Carlo Bonzanigo, can count on a multicultural team of 20 people that give the Chinese headquarters of Pininfarina a strong international character and global vision in the daily challenge to an increasingly demanding market.

Partner for the interiors of the three concept cars:

The body is distinguished by a radically futuristic design language that works perfectly with the use of dark brown Alcantara®. The material born in the green heart of Umbria is perfect for its lightness and adaptability, even in the sportiest applications. For the VIGNA seats, Alcantara® ensures the driver’s stability thanks to its excellent grip, while its breathability provides maximum comfort even in racing situations.

The Ice tone Alcantara® was chosen to cover the headliner for its exceptional ability to adapt to the most diverse surfaces and for its comfort even in racing situations.

The charcoal-grey Alcantara® with tonal stitching on the headliner to emphasise its fine-tailoring style.

Watch SUV Cut Off, Brake Check, Attempt To Force A Tesla Off The Road
InsideEVs Tows With A Tesla Model 3: Consumption Is Insane
Watch Porsche Taycan Turbo S Blow Past Its Top Speed On The Autobahn
Watch Tesla Model S Performance Race Lamborghini Aventador S Roadster
How To Make Sure Your Tesla Is Ok During A Stay-At-Home Order

Watch SUV Cut Off, Brake Check, Attempt To Force A Tesla Off The Road
InsideEVs Tows With A Tesla Model 3: Consumption Is Insane
Watch Porsche Taycan Turbo S Blow Past Its Top Speed On The Autobahn
Watch Tesla Model S Performance Race Lamborghini Aventador S Roadster
How To Make Sure Your Tesla Is Ok During A Stay-At-Home Order