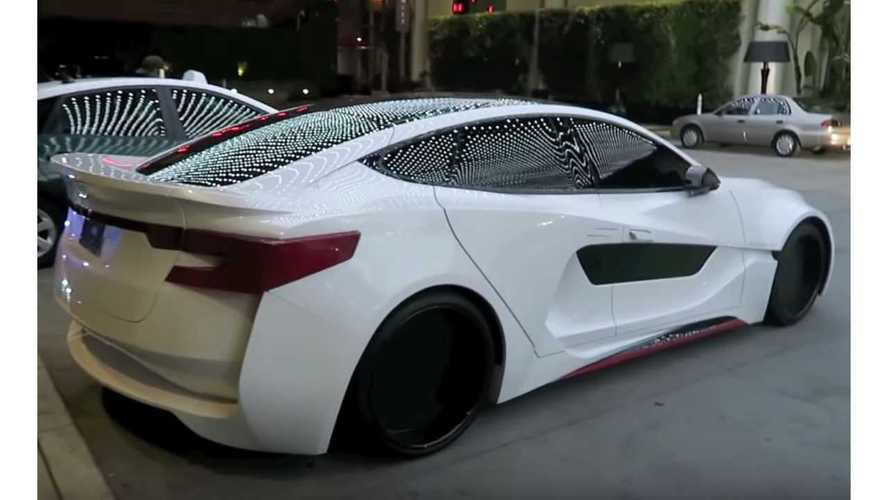 CELEBRITIES GET CREATIVE WITH THEIR TESLA MODEL S

As Tesla gets more and more common, many owners are looking for something to make their car a bit more distinctive. Celebrities are no exception. Let's take a look at a few stars who've modified to their Model S in some unexpected ways. Looks like they've chosen to customize their car to reflect their own individuality, creativity, and nonconformity.

Skateboarding legend and sports icon, Tony Hawk, connected with us (Evannex) in order to add our Center Console Insert into his carbon fiber Model S interior. He also installed some new TS117 wheels in black to match his vehicle's all-black exterior. And check out his Tesla-inspired skateboarding video — definitely a novel way to show off the rear-facing camera feature.

Yes, Tesla rocks. But what would happen if a Model S got a complete "rock and roll" makeover? Using a red, black and gold color palette, the Count's Kustoms team repainted Dee Snider's Tesla Model S so it'd look more comfortable pulling up to a hard rock concert instead of a pretentious, Chi Chi restaurant. Yes, it makes a statement. But, then again... so did Twisted Sister.

Britain's alternative metal group, Bring me the Horizon, is headed up by lead singer Oli Sykes. Our servers almost broke when Sykes' millions of followers on social media checked out his new tricked-out Tesla on our blog. Here's a look at his matte black ultra-sinister Model S featuring some of our accessories.

But, it's not just rock acts that like to customize their Tesla. R&B star and Grammy-award winning artist Lionel Richie created a truly bespoke interior with our Center Console Insert as the centerpiece to help create a luxe look coupled with Tesla's "piano" black-gloss trim finish. His Model S exterior features a "chrome delete" and was outfitted with stunning TS112 wheels in all black.

We had to save the wildest Tesla "remix" for last. Music producer and member of the Grammy award winning group, Black Eyed Peas, will.i.am decided to transform his Model S into a one-of-a-kind custom car that looks unlike any other Model S on the road today. It turns out WILL.I.AM actually owns a car tuning/body kit company called I.Am.Auto and he had the transformation done at West Coast Customs — his intergalactic Model S looks like something a storm trooper would drive.

Above: A before-and-after look at will.i.am's Tesla — about the only thing he kept from the original was the white exterior (Source: Sun Motors UK; Jason Toney Designz)

Well, that's not it. It turns out that more celebrities, professional athletes, and music artists also love themselves a Tesla. That said, these Tesla transformations are the most eye-catching we've encountered thus far. Although I'm sure a few celebrity friends of Elon Musk will soon trick out a new Model 3. If so, we'll be sure to showcase them here.