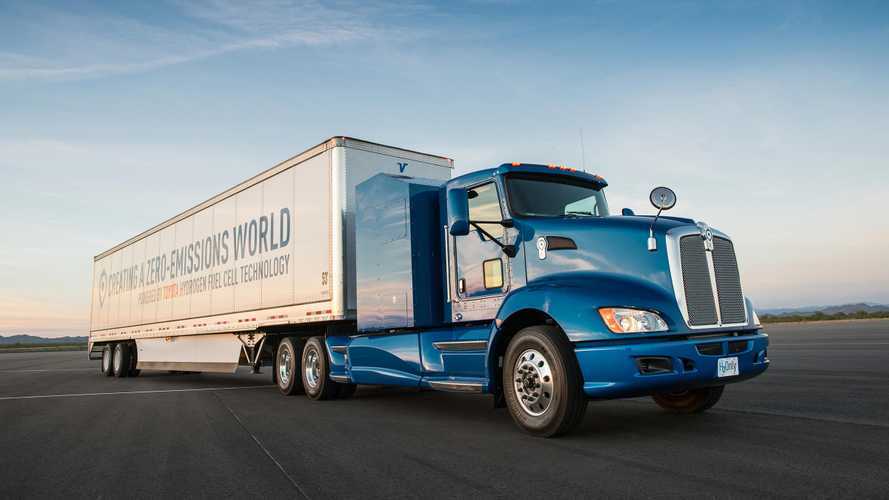 Take the fuel cell stack in a Toyota Mirai, then take another one, string them together, and you will have enough potential power to move a semi. That's what Toyota is proving with its new Project Portal hydrogen semi truck, which is getting official this morning at the Ports of Long Beach and Los Angeles in California. Toyota will put one H2 semi into service this summer, with more – potentially – to come.

The Project Portal semi looks from the outside like any normal class 8 big rig, and it is ready to carry 80,000 pounds and can go 200 miles per refueling. While the fuel cell stack in the Mirai offers 153 horsepower, the two used together in the semi put out "more than 670 horsepower and 1325 pound feet of torque." The semi also has a "relatively small" 12kWh battery. Refueling the hydrogen tank takes around 20 minutes, comparable to refueling a diesel truck.

Craig Scott (yes, that Craig Scott) told InsideEVs that Project Portal is starting at the ports because it was in Toyota's back yard and, "It makes the problem glaringly obvious. The port is a really big problem, from an emissions point of view. We think there's a need for it here."

While there are hydrogen refueling stations in Long Beach, it's not feasible to refuel the truck there ("we would probably take the station down with the amount of hydrogen we'd use," Scott said). That's why Toyota is installing a temporary station down near the dock for the truck.

"One truck holds 10 times more fuel than one Mirai," he said. "So now you're talking about 10 trucks easily using a ton of hydrogen in a day, whereas that same volume of hydrogen would probably take a month in a car. There hasn't been cost reduction on the molecule side fast enough." By molecule side, Scott means the hydrogen supply, and he said that Project Portal has a complementary goal of reducing H2 refueling costs. "The price today is too expensive, and it needs to come down drastically. That can be accomplished, in large part, by pulling more hydrogen through the system, and we'll pull a lot more hydrogen through the system a lot faster in a heavy duty environment than we would in a light-duty environment."

In Japan, Toyota is working on larger, hydrogen-powered vehicles like passenger buses to have ready by the 2020 Tokyo Olympics. Project Portal, though, is a U.S.-led endeavor, Scott said. Toyota engineers here are getting some assistance from Japan as they link the two fuel cell stacks, but mostly they are moving forward on their own.