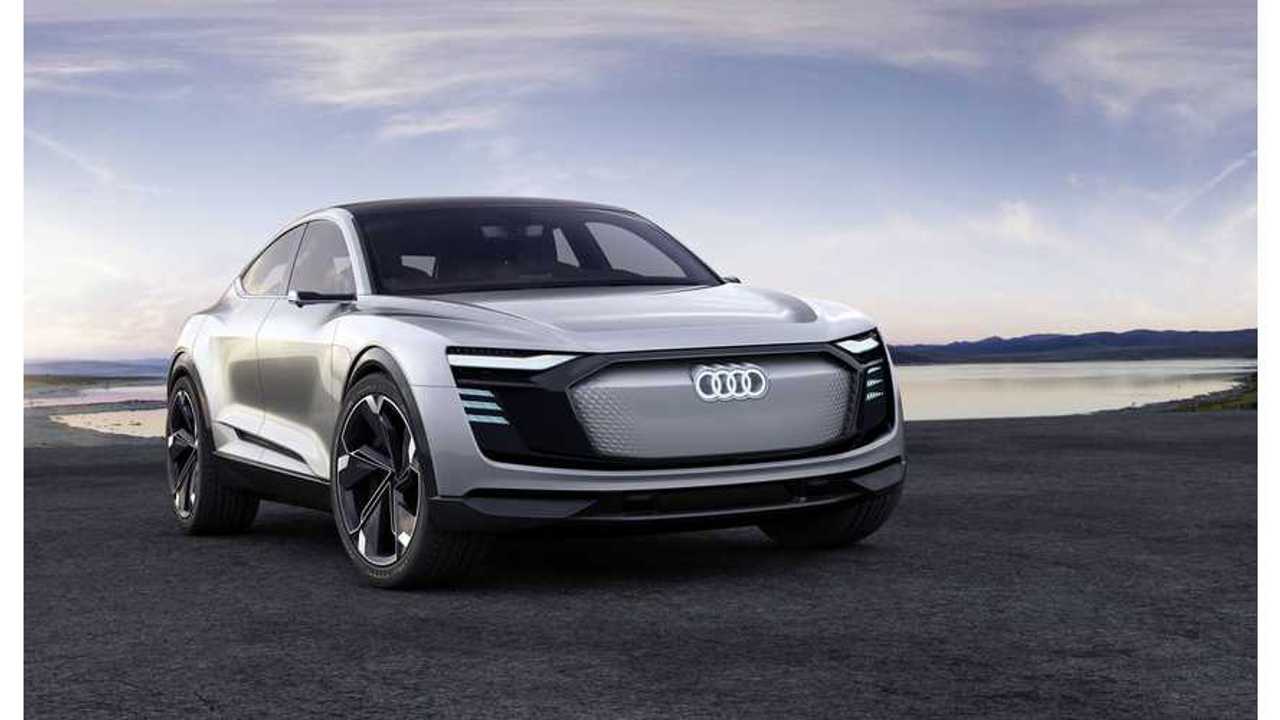 "With a range of over 500 kilometers (310.7 miles) and the special electric driving experience, we will make this sporty SUV the must-have product of the next decade."

Previews production model due in 2019.

At the 2015 Frankfurt Motor Show, Audi introduced the E-Tron Quattro to signal its electric crossover agenda. That concept will morph into a production model in 2018 and it will be followed a year later by this, the “coupe” version.

The E-Tron Sportback debuting today at Auto Shanghai is yet another crossover-coupe mashup from VAG and it shares the spotlight at the show in China with two other electric concepts featuring a similar body style: the VW I.D. Crozz and the Skoda Vision E.

As hinted by Audi in the numerous teasers released in recent days, the new concept with the four-ring logo is packed with light-emitting diodes. Besides having full-LED headlights and taillights, the E-Tron Sportback has approximately 250 extra LEDs on the front bumper to the left and right of the corporate singleframe grille. These form different lighting patterns as a way to communicate with the other cars on the road. The Audi logo is illuminated by LEDs as well.

If you care more about range rather than outright performance, the latest crossover-coupe concept from Audi has a large 95-kWh lithium-ion battery pack with enough juice for more than 310 miles (500 kilometers) in the rather optimistic New European Driving Cycle - NEDC  (think 225-250 miles in the real world).

Typical concept cues include the large alloy wheels (a 23-inch set in this case), side cameras, and a minimalistic interior cabin with an all-digital instrument cluster and a generous touchscreen for the infotainment system. Sitting below it is yet another touchscreen for controlling heating, ventilation, and air conditioning (HVAC), while positioned above the glove box is a fourth thin and wide screen showing details about the weather, time, and multimedia info.

Audi hasn’t said a word about where it will put together the production model, but it might share the assembly line with the non-coupe version already confirmed to hit the assembly line at the firm’s factory in Brussels, Belgium.

Design study and technology demonstrator, electric car and power pack in the guise of a coupé: A versatile concept car makes its world debut in the Chinese metropolis of Shanghai as the Audi e‑tron Sportback concept. The brand with the four rings presents the study of a four-door Gran Turismo with a powerful 320 kW electric drive at the Auto Shanghai 2017 this spring. The formal idiom of the coupé with Lux Silver paint finish combines classic Audi elements with an array of trendsetting details: an electrifying architecture, tailored consistently to the technology and the package of the electric drive.

The Audi e-tron Sportback represents an important milepost for Audi along the road to electric mobility. Rupert Stadler, Chairman of the Board of Management of AUDI AG, confirmed: “Our Audi e-tron will be starting out in 2018 – the first electric car in its competitive field that is fit for everyday use. With a range of over 500 kilometers (310.7 miles) and the special electric driving experience, we will make this sporty SUV the must-have product of the next decade. Following close on its heels, in 2019, comes the production version of the Audi e-tron Sportback – an emotional coupé version that is thrillingly identifiable as an electric car at the very first glance.”

In its consciously light-colored interior the Audi e-tron Sportback concept offers a blend of functional clarity and reductive controls as a formal principle. Expansive touch-sensitive screens below the central display, on the center console and in the door trims supply information and interact with the on-board systems. Horizontal surfaces on the dashboard and the seemingly floating center console convey a sense of open perspectives for the occupants of the four individual seats.

The concept car’s lighting technology is an innovation that is visible by both day and night. Digitally controlled Matrix LED units at the front and rear produce an excellent light yield. Minuscule Digital Matrix projectors literally make their mark on the road ahead, turning light into a versatile, dynamic channel of communication with the surroundings.

For its drive, the e-tron Sportback uses a configuration that will also be adopted in future production Audi models with all-electric drive: One electric motor on the front axle and two on the rear power all four wheels, transforming the high-performance coupé into a quattro in typical Audi style. 320 kilowatts of power – which can even reach 370 kW in the boost mode – provide a fitting level of propulsion, with the sprint from 0 to 100 km/h (62.1 mph) a done deal in just 4.5 seconds. With the battery’s energy content of 95 kilowatt-hours, its range is in excess of 500 kilometers (310.7 miles) (NEDC).

Dr. Dietmar Voggenreiter, Member of the Board of Management for Marketing and Sales at AUDI AG, understands the special significance of electric mobility for the market in China: “We have made a conscious decision to give the Audi e-tron Sportback its first showing here in Shanghai, because China is the world’s leading market for electric automobiles. That applies as much to the infrastructure and financial support as it does to sales. There are already about 150,000 charging stations in the country, with another 100,000 due to come on stream by the end of 2017. We are well equipped for this rapid growth. In the next five years we will be offering five e-tron models in China, including purely battery-powered vehicles with ranges well in excess of 500 kilometers (310.7 miles) such as the Audi e-tron Sportback.”