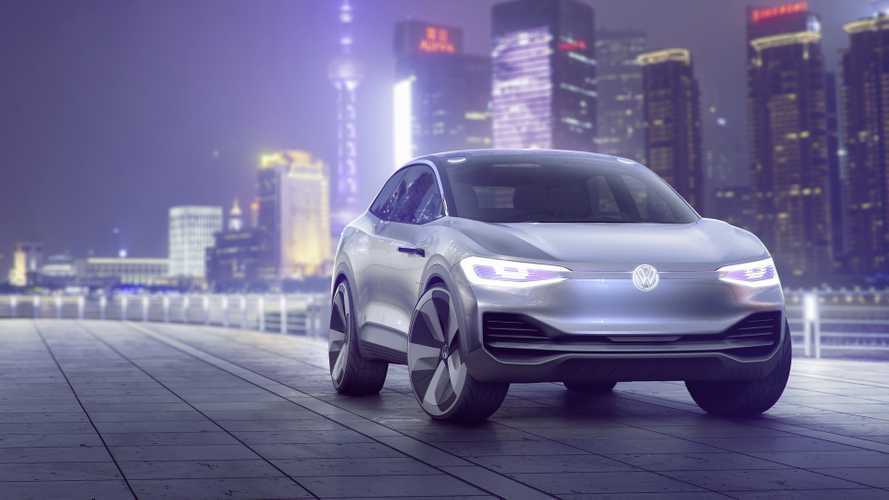 Volkswagen says it handles much like a Golf GTI.

After a hatchback and a minivan, VW’s third I.D. concept foretells what will become in a few years a zero-emissions crossover riding on the group’s new MEB platform developed specifically for electric vehicles. With sliding rear doors, a coupe-like roofline and individual rear seats, it’s no ordinary CUV.

Crossover-coupes are certainly not for everyone, but the I.D. Crozz (yes, with a “z”) does look quite interesting with its prominent body creases and futuristic headlights. The way the sleek all-LED taillights extend onto the rear fenders is also a nice touch. We could do without the illuminated VW badges, though. By pushing the wheels outwards, the engineers were able to shorten the overhangs and maximize wheelbase to boost cabin space.

Speaking of space inside, headroom for rear passengers seems to be plentiful despite the inclined roofline, while accessing those back seats should be easy thanks to the sliding doors and the lack of a B-pillar. Those lines on the massive panoramic roof are actually strips of LEDs turned on using gesture controls to further brighten up the interior.

With the roof being transparent, the light-emitting diodes are also noticeable from the outside. VW wishes to point out the showcar offers just about the same amount of space inside the cabin as the Tiguan, despite being smaller on the outside and having a lower roofline.

You’ll have a hard time finding any physical controls as instead VW has decided to keep it simple by installing a 10.2-inch tablet for the infotainment system and an all-digital instrument cluster measuring 5.8 inches. More touch-operated controls have been implemented onto the door panels. An augmented reality head-up display comes to diminish distractions behind the wheel whenever a human driver is in control of the electric crossover.

Power comes from a pair of electric motors delivering a combined 302 hp (225 kW) distributed 101 hp (75 kW) front and 201 hp (150 kW) rear good for a top speed of 112 mph (180 kph). With the weight being distributed 48 percent front and 52 percent rear, VW mentions the crossover “demonstrates handling characteristics like a Golf GTI’s.”

Thanks to a sizeable 81-kWh lithium-ion battery pack incorporated into the concept’s floor, the I.D. Crozz can cover up to 311 miles (500 kilometers) between two charges as per the New European Driving Cycle (NEDC) - think about 225-240 mile in the real world. If you’re in a hurry, 30 minutes worth of charging with a 150-kW DC fast charger will replenish the battery pack to an 80-percent level.

The I.D. Crozz introduced today on the dawn of the Auto Shanghai in China also previews the company’s intentions as far as autonomous driving. Activating the “I.D. Pilot” mode will automatically deploy the laser scanners in charge of analyzing everything around the car. The adaptive LED headlights will also be activated by turning left or right depending on what the onboard computers are about to do.

Even the exterior and interior ambient lighting will be modified after switching on the fully autonomous mode, which will also retract the steering wheel into the dashboard to free up more space inside the minimalistic and spacious cabin.

The first road-going electric VW riding on the MEB platform is slated to go on sale in 2020 and will be followed by a multitude of models previewed by these I.D.-badged concepts.