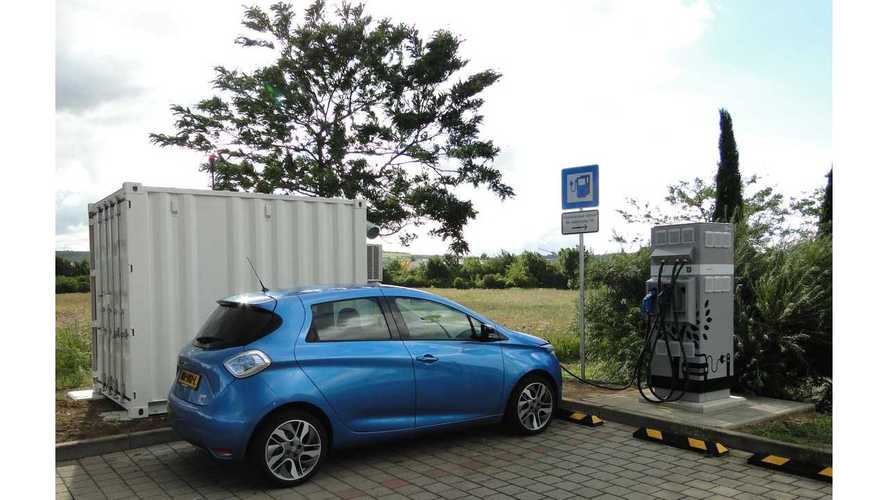 The two find that ESS at fast charger locations is a very viable application, especially if the power supply is limited in the area.

Two new energy storage units made by Connected Energy use old Renault EV batteries, and were recently installed at fast charging stations on highways in Belgium and Germany.

"The E-STOR technology developed by Connected Energy uses second-life batteries from Renault electric vehicles. With the E-STOR system, the batteries are recharged at low power, and the stored energy is then released at high power. It thus becomes possible to offer electric vehicle charging services in locations where constructing a high power  connection to the power grid would be very costly. Economical and simple to install, E-STOR will contribute to the development of a network of quick-charging stations in Europe."

The press release doesn't tell the capacity of the E-STOR, but we believe it will be scalable to the needs of the station quite easily (goodness knows Renault has plenty of used 22 kWh battery packs coming back to them from lease, given the new 41 kWh upgrades now being installed). In early 2016 we note that Connected Energy had 50 kWh and 100 kWh versions available.

On average, EV batteries (that aren't swapped out for larger ones) are expected to be used for 8-10 years in the vehicle (it could be more), and then - after capacity fades to some 70% - will be given a second likfe in stationary aplications.

About the partnership and E-STOR:

"“We are developing a range of E-STOR systems, some, like the two installed in Belgium and Germany are designed specifically to enable lower cost more sustainable electric vehicle charging so it’s very great to see these in action,” commented Matthew Lumsden, Managing Director of Connected Energy. “We are now talking to several parties about projects in the UK and Europe and look forward to wide scale roll out in coming months.”

As a pioneer and leader in electric vehicles in Europe, Renault is doing its part to support the energy transition by re-using the batteries from its electric vehicles for stationary energy storage. The solutions offered by Renault with its partners have multiple applications, from individual homes and multiple-unit residences to industrial sites.

Electric vehicle batteries generally have a service life of eight to ten years. However, they still have substantial capacity for further use in stationary applications, thus extending their life before recycling. It is in particular to optimize this complete life cycle that Renault has set up the rental of the battery with its customers of electric vehicles.

Connected Energy’s E-STOR systems also offer a solution to load management for use on industrial and commercial sites. Systems can be controlled by a sophisticated energy optimisation platform to provide a reliable and proven complimentary power source at peak tariff times.