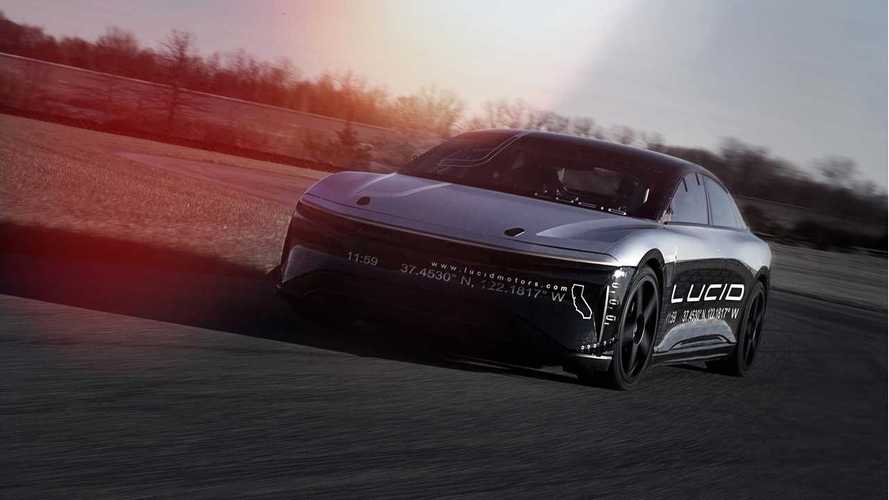 As the first day of the New York Auto Show came to a close last night, the folks at Lucid Motors started getting busy for their big reveal this morning. They rolled in the Alpha Speed Car test model of the Lucid Air, in time for us to get a sneak peek.

When the @lucid_motors prototype just shows up at @NYAutoShow unannounced, you gotta film it. pic.twitter.com/BOvLqvvjCP

This morning, we learned a few details about the modified Alpha Speed Car, most impressively that it recently spend some time at the TRC Ohio automotive proving ground, cruising the 7.5-mile track to:

"...evaluate high-speed behaviors, including vehicle stability and powertrain thermal management. The test, which is software-limited to 217mph (350km/h), was successful in demonstrating the capabilities of the car and in finding areas for improvement that could not be properly evaluated in static bench tests."

Lucid's director of marketing, Zak Edson, told InsideEVs that the car performed well, giving the team a lot of confidence in the car's motor.

The next step, Edson said, is to go back to the track without the top-speed limiter in effect and see what happens. You can watch a short promotional video of the Ohio tests below. Lucid Motors also tested the Air in winter conditions a few months ago up in Minnesota.

All of this testing should give Lucid the data it needs to get the Air ready for production.

The higher-end models, which will likely cost over $100,000, will offer 1,000 horsepower and have enough batteries to power it for over 400 miles. You can find more details on the Air's specs here.