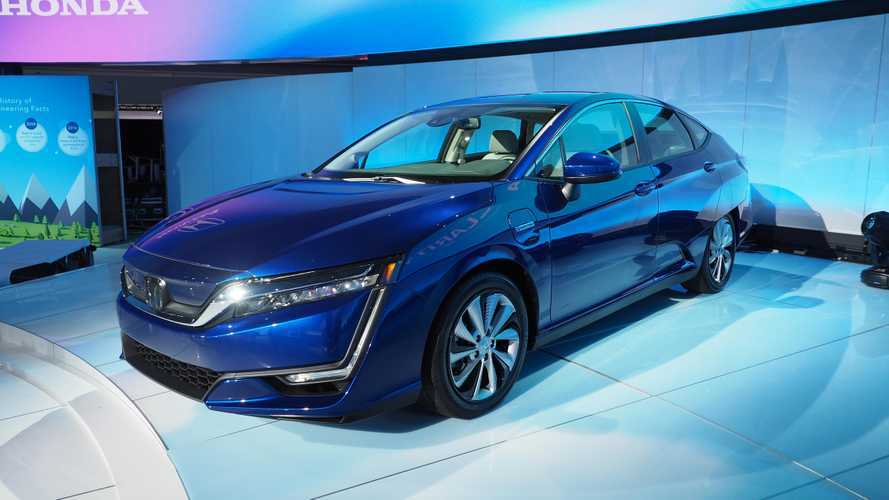 Even with the big info drop on the electric and plug-in hybrid versions of the Honda Clarity vehicles, there's still a lot we don't know about these new cars. Like, how many all-electric Clarity EVs does Honda plan to sell (not that many, it turns out), how did Honda arrive at the 42-mile EV range of the PHEV (math), and why is the PHEV a 2018 while the electric and the fuel cell are 2017s (read on).

To get more information, we sat down with Steven Center, vice president of the Environmental Business Development Office and the Product Regulatory Office of American Honda.  Here's a few highlights of our chat and other information that Honda disclosed about the Clarity Series:

Here's a transcript of our conversation (lightly edited for clarity). A month or so ago, we spoke with Center about the logic behind the 80-mile range of the Clarity Electric, so if you're curious about that angle, read this. Also, if you're a reader who made a comment in the New York reveal post, you might find some of these questions familiar. We thank you for your assistance.

InsideEVs: The plug-in hybrid is listed as a 2018 and the fuel cell and electric are 2017.

IEVs: Is the PHEV just coming a little bit later?

SC: Yeah. It's more meaningful for that car because the plug-in hybrid will be sold in all fifty states. So to the extent you have a high penetration of leasing, that really helps. Whereas the fuel cell is leased in a different manner, so the residual doesn't matter as much.

IEVs: Okay, makes sense. And then, I heard you say the plug-in hybrid was going to be the sales leader. I'm guessing the EV is next, and the fuel cell is going to be the least or you don't know yet?

SC: I don't know, but I think it could be neck in neck. Maybe the fuel cell would be more. I think people are going to start to realize that a) it's an electric car, and b) you don't have any of the battery car limitations in terms of charge time or range. 'Cause that car won't have a 366 mile EPA range, and you don't have to have home to charge it.

IEVs: Right, and you said at the press conference about a hundred of the fuel cells have been leased so far. Is the just US or is the global?

SC: No that's US, and that goes up everyday.

SC: A lot of data about how far people drive in a day, and that's kind of why we stuck with around 80 for this car. Because we found that really, so many standard deviations over. Most people could live within the 80. And that car, remember, has DC fast charge so you don't have a real penalty. And you don't have to lug around all that extra battery. With the plug-in hybrid, it was the same type of thing. The Accord Plug-In Hybrid that we had in 2014 had 13 miles of range. That was really not very effective. So we wanted to give people enough for a good day's worth of driving around town, or commuting. So if you plug that in at work, and in California there's a lot of workplace charging, that's an 80-mile car. It was a function of what we found to be within what people needed and also how many batteries we're going to put where in the car. It is a bigger car, don't forget, so while the Volt might have a little more electric range, it's not a five-passenger, mid-size car.

IEVs: Right, and the thing I've been talking with you about is that I love that we're in this era now where there's so many choices. I'm not saying one is right or one is wrong. I just want to know when you guys were thinking about it, where did the 42 come from, you know?

Inside The Honda Clarity EV

SC: Well, here's what you're going to see. In the near term, there's going to be a race for range, because everyone's gotta get over whatever that threshold is. And then you're going to see the rational buying behavior step back in because people have to pay for this. These cars have to make economic sense for everybody. So, you're going to see extremes of range reached and then you're gonna see it snap back down to a sweet spot. So I think you've seen now the growth part of that, and it's gonna cycle around with the mid-cycle updates, and full model changes, and new entries. And five years from now, we're gonna be in a completely different place. But what you won't have is limited short range vehicles. Everyone will have another way to get around what you get in the car. Think of it this way. When you buy a printer from HP, they give you starter cartridge. That's just to get you started. We're not gonna do that anymore, we're past that. You're gonna get the XL cartridges or the regular ones. You might even see one of the competitors has a same car with several battery sizes. And you might see that. In our case, what we're doing right now is giving people powertrain choices.

IEVs: Speaking of choices and competitors, do you see people coming into the Clarity series by comparing them to other companies' green cars or will they came in to shop for an Accord and now they're like "Oh you know what? Maybe the Clarity plug-in hybrid is the one that I want."

SC: I think in terms of conquest and loyalty, I'll be so bold to predict half and half. A lot of Honda people want to get in the game, maybe we've lost customers over the years 'cause we didn't have enough selection. But I think while we're gonna retain people, and they'll want to have their Honda this way. We're also, through choices and variety, we're gonna attract new customers. We think we've got a winning package. If you come in and you want an Accord, the Clarity will be very appealing because this is an Accord-size car, it's got a really modern, clean interior, it's got enormous leg room, and you don't have the trunk space penalty for the most part.

IEVs: And how important is that going to be to get people interested in these vehicles do you think? You compare with the Volt which has limited space in comparison.

SC:  A lot of the early environmental cars were small cars, and they were small cars because of the need for the highest and most optimal performance. I think we're probably the only manufacturer for anything like this in a mid-size car, and that's huge. And if you can't afford that competitor's very expensive sedan, but want to get in the game, there's nothing that the competitive car has over Clarity, other than range. And we think a lot of our customers will be just fine.

IEVs: You talked a little bit about the future. Looking at truck segments for some sort of electrification. We've seen the various mode hybrid systems sort of go through an evolution. What is the evolution look like for these three. Does it remain a sort of three separate tracks? So, next could there be a truck that has three variants? What are some of the possibilities?

SC: I think what you might see is a diaspora, would be the word. Where they each go for their own application. So a heavier vehicle, you maybe can't put enough battery in it because then you gotta put more battery in to move the heavy battery. So you might see fuel cells being applied to larger heavier vehicles, you might see batteries applied to smaller lighter vehicles, and plug-in hybrids may be available to everything. I can't predict the future, but this was a big feat, getting all three in one.

IEVs: I know I've been talking with Steve Ellis for years, about the continued shrinking of the fuel cell stack.

SC: Someone asked me, "Well, you know, the sedan market's struggling, why are you doing this in a sedan model?" First of all, the sedan market might have contracted a little bit, but it's still nearly half of the industry. So, I'm not buying any of that logic. But from an engineering exercise, if you can fit all this under the hood of a sedan, then the same thing fits under the hood of a truck. So, I think we took the engineering challenge up and we're ready to go in every direction.

IEVs: Last question and we'll figure this out whenever we're able to drive the plug-in hybrid. You said the electric motor can drive the wheels, the engine can do it in some situations. Is that at low speeds, high speeds, only on the highway? When does the engine kick in, those kind of things.

SC: I know when, I don't know if I can say yet, but I'll say it kicks in if you need it. There's actually two answers to that. One is power demand, but the other is when the battery runs out. It kicks in when you need it, but you have selectable modes. So if you push the econ mode, that's gonna cause the engine to come in at different points versus the sport mode. And in sport mode, that thing is like a rocket. So I think if you enjoy too much sport mode, you might need the engine more often.

IEVs: Right, same problem with all the hybrids.

SC: Well, you know it's one or the other.

IEVs: Right. You gotta get the power somehow.