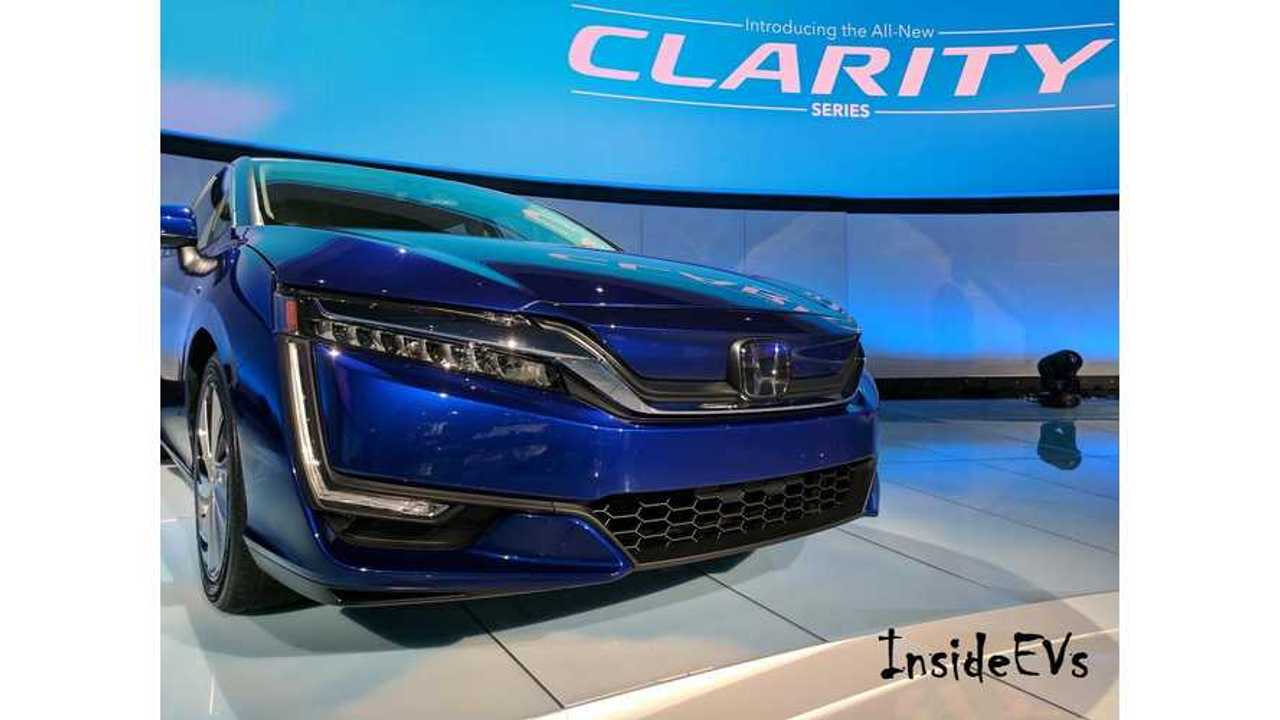 It's the hottest new trend in the green car world: offer one model with multiple eco-friendly powertrians. The Hyundai Ioniq triplets come in full electric, plug-in hybrid, and gas-electric hybrid versions. Even the old stalwart Toyota Prius can have a plug or not. And now we've got more details about the latest green onslaught from Honda: the three-pronged Clarity line-up. Are they the answer to everything?

We've already seen the Clarity Fuel Cell, which launched in December 2016, but Honda made us wait until today to learn more information about the hydrogen car's siblings, the battery-powered Clarity Electric and the Clarity Plug-in Hybrid.

Was it worth the wait? Well, that depends on how you feel about a PHEV with a respectable 42 miles of all-electric range (via a 17 kWh battery), and a company that wants to sell 75,000 Clarity vehicles in the U.S. in the first four model years.

Of note:  We are at the New York Auto Show, and have included a live gallery of shots for the new Honda Clarity Plug-In Hybrid, and All-Electric below, as well as some live-stream video of the plug-ins' debut from New York (you won't believe the intro).

We think the new Clarity Plug-In Hybrid will be a solid entry in the plug-in vehicle market, not so much for the all-electric version.  The PHEV Clarity is now second only to the Chevy Volt in EV miles (depnding on how you class the BMW i3 and its option REx/range extended option) but is a much bigger car, officially classes as a mid-size, with plenty of room for four, and even five can squeeze in without too much hassle.

As you can see in the pictures, each Clarity has a slightly different front end, head- and tail lights, and 18-inch alloy wheels. All three also have their own "halo colors," which we'll try to get the names of later, since blue, green, and red probably aren't the official monikers.

For now, here are the details Honda has shared about the new Clarity vehicles:

Pricing is of course still a big question.  The Clarity Electric is rumored to have a price-tag around $35,000 when it launches, but given the EV's limited release - and more limited range, we don't expect many sales.  However, if the Clarity PHEV can keep its MSRP under $40,000, it should be decently received.

Live-Stream Debut Video (below):  Honda introduces its plug-in offerings like only it can...by hijacking the presentation to promote the new Civic Type R - "the fastest, most powerful Honda ever sold in the US".  Seriously.

The Clarity series are not the end point – or even the demarcation of a short rest – at least for Honda's "green" efforts.  Next up, the company will introduce a new hybrid to the U.S. in 2018, and the Clarity family is expected to contribute, "to an anticipated five-fold increase in Honda's U.S. sales of electrified vehicles over the next four years," according to the company's press release. This is all part of Honda's plan to make 66 percent of its global automobile sales be electrified in some way by 2030.

Gallery (below):  Live shots of the new plug-in Clarity PHV and BEV from New York

Inside The Honda Clarity EV

Inside The Honda Clarity EV Again