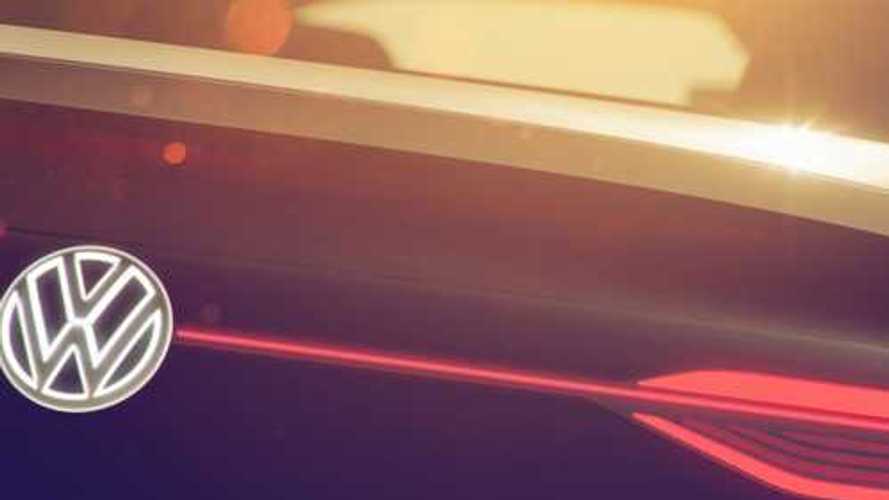 We get our first Look At The VW I.D. Coupe-SUV Concept

The new model features both an electric powertrain and all-wheel-drive capabilities.

If there’s one thing Volkswagen has made crystal clear in the aftermath of the nasty Dieselgate, it’s the fact that it is channeling most efforts into a full range of EVs. To help spread the word, VW introduced last year at the Paris Motor Show the I.D. concept, a Golf-sized electric hatchback. For the Detroit Auto Show held in January, the folks from Wolfsburg prepared the I.D. Buzz to serve as a preview for what might become a new Microbus.

Now, VW is gearing up to introduce its third I.D.-badged concept at the Auto Shanghai 2017 in China next week. It’s one of those controversial coupe-SUV mashups and just like its predecessors, it signals the launch of a production model in a few years from now. All of these zero-emissions models are going to ride on the VW Group’s new Modular Electric Drive kit platform set to underpin a multitude of cars from Skoda, SEAT, and Audi in the next decade.

The VW ID Hatchback (seen at left) arrives in 2020, a variant of the VW ID BUZZ ~2 years thereafter

As it was the case with the two previous I.D. concepts, the new one has been envisioned with an all-wheel-drive system as well as with fully autonomous driving capabilities by simply pressing the VW logo on the steering wheel. Without going into details, VW says the concept’s “long driving range” will be on a par with a conventional gasoline-powered car, so look for something in the region of at least 310 miles (500 km) in the real world.

For now we only have this single teaser image showing the slender LED taillights that appear to extend onto the rear fenders. There’s also an illuminated VW badge, a predominantly black rear end, and the coupe-like sloped roofline as seen on models such as the BMW X4 and Mercedes GLC Coupe.

Following the concept’s debut on April 19th at Auto Shanghai, VW will then prepare for yet more I.D. concepts, with one of them believed to be a sports car.

Zero emission vehicle has all-wheel drive and autopilot mode Crossover is a new member of the I.D. family

Volkswagen will be launching a new range of avant-garde electric vehicles in the near future. This month, Volkswagen is providing a first look at a new important frontrunner of electric mobility in the world premiere of a crossover concept vehicle at Auto Shanghai 2017 (19 to 29 April). The concept car is the brand's first electrically powered crossover utility vehicle (CUV) – a four-door coupé and sport utility vehicle (SUV) in one.

After the premieres of the I.D. (Paris, 2016) and I.D. BUZZ (Detroit, 2017), this concept car follows as the third progressive member of the I.D. family – a new generation of zero emission vehicle with a long range and a charismatic electric mobility design. All I.D. models also impress with a new interior world and with their layout, flexibility, size and comfort, which exceed standards for this vehicle class.

The CUV of the I.D. family was conceptualised as a sporty, interactively designed zero-emission all-rounder – with electric all-wheel drive that is just as impressive in the urban environment as it is on the rough terrain covered in an adventurous and active lifestyle. A long driving range on the same level of the range of today's petrol powered cars makes it suitable for long trips. Like the I.D. and I.D. BUZZ, this concept car can also drive fully autonomously. All it takes is a light push on the VW badge on the steering wheel to activate this autonomous mode. The steering wheel retracts electrically into the cockpit where it forms a single unit with the displays and controls that have been implemented fully digitally. The electric vehicle recognises its surroundings and other road users via laser scanners, ultrasonic and radar sensors and cameras.

Volkswagen has set the clearly defined goal of advancing electric drive vehicles from the status of a start-up niche to large-scale production models by the middle of the next decade in a worldwide product offensive. The concept car that is now making its debut in Shanghai illustrates just how multifaceted the range of these future Volkswagen electric models will be in the year 2020.