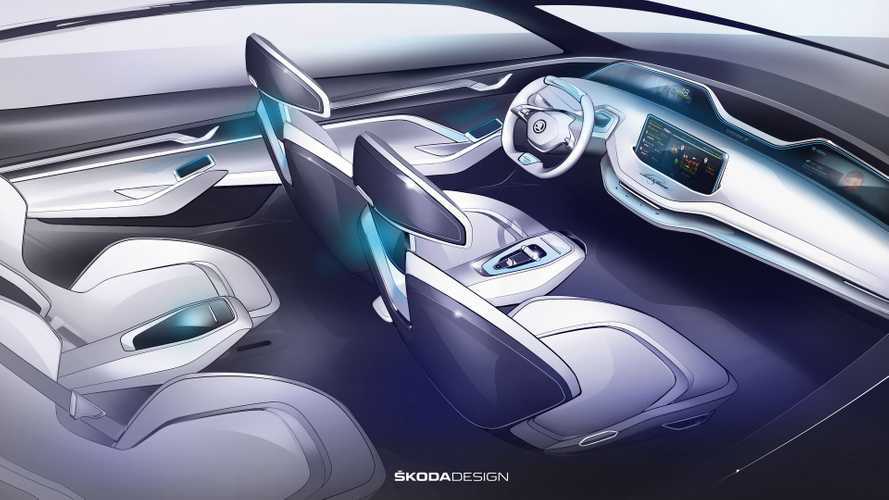 The coupe-SUV eschews conventional controls for a multitude of screens.

After previewing the concept’s exterior last week in several teaser images, Skoda is now ready to provide a glimpse of the spacious interior courtesy of a new batch of nice renders. The lack of a conventional B-pillar means getting in and out of the Vision E should be a piece of cake, especially since opening the doors will automatically trigger the seats to swing outwards for an even easier entrance. The seats will then return to their original position once the electrically operated doors are closed.

Envisioned strictly as a four seater, the new Vision E concept adopts a minimalistic cabin with very few physical controls. Instead, there are no less than four displays for each person inside the cabin, plus a fifth screen mounted in the center console to access the infotainment’s settings. Moreover, each door panel comes with a built-in phone box benefitting from inductive charging, so those inside will avoid the hassle of having to use a cable to fill up the smartphone’s battery.

Taking into account Skoda says both front seats can be fully reclined, it means the Vision E has been imagined as a fully autonomous vehicle capable of doing all the driving without any human input at all. In typical Skoda fashion, the roomy cabin is further enhanced by the spacious trunk, although the Czech marque isn’t saying a word for now about the cargo capacity.

Details about what powers the concept have not been disclosed, but we do know the Vision E will adopt an entirely electric setup. It’s already evident by the lack of a central tunnel, thus further boosting the space inside.

Skoda’s green agenda will begin in 2019 with the launch of the plug-in hybrid Superb prior to the release of a pure EV in 2020 based on the Volkswagen Group’s new MEB platform. By 2025, the company’s electric car portfolio is going to include five models.

Meanwhile, the Vision E will celebrate its world premiere in a couple of weeks at the Auto Shanghai 2017 in China. The first press day is scheduled for the 19th, but we’ll likely see the concept online sooner than that.

Mladá Boleslav, 6 April 2017 – ŠKODA is showcasing their purely electrically driven concept car at Auto Shanghai 2017 (19 - 28 April). The futuristic design shows the characteristics of ŠKODA’s new design language for future electric vehicles. The most striking body features include counter-opening doors and the absence of a B-pillar. In the bright interior, four rotatable single seats and the missing central tunnel ensure a generous sense of space.

The seats are slightly elevated, and so ensure a good view. They can also be rotated by 20 degrees. When the doors are opened, the seats swing outwards, making getting in and out easier. After the counter-opening doors have been electrically closed, the seats return to their original position. The concept vehicle introduces this new ‘Simply Clever’ idea that provides additional comfort thanks to its ergonomically optimized design and mechanics. A particularly generous sense of space is created, as the ŠKODA VISION E does not require a middle tunnel either in the front or rear.

In addition to the cockpit screen, on which the classic vehicle data is displayed, the ŠKODA VISION E features additional screens for passengers. The centre of the dashboard houses the central touch-screen display, on which the driver and front passenger can read and operate all the important functions and services of ŠKODA Connect.

Each passenger has their own screen that can be used for numerous comfort functions such as information and entertainment. The front passenger’s monitor is located in the instrument panel, and the screens for the passengers in the rear are built into the backrests of the front seats. In addition, passengers can personalize their entertainment programme via their own touch displays. The control element for the front passenger is located in their right armrest; the passengers in the rear have theirs in the between the two individual seats.

There is an integrated phone box located in the inside of each door, with which smartphones can be inductively charged; personal settings, data and information on the smartphone can be accessed via the individual passenger’s display. Ambient lighting, which can be programmed in ten colours, is integrated into the decor strips in the doors and below the dashboard.

Under the large rear door, there is a large boot – characteristic of ŠKODA.

The front seats can be reclined and the steering wheel raised to provide maximum space utilization and comfort.