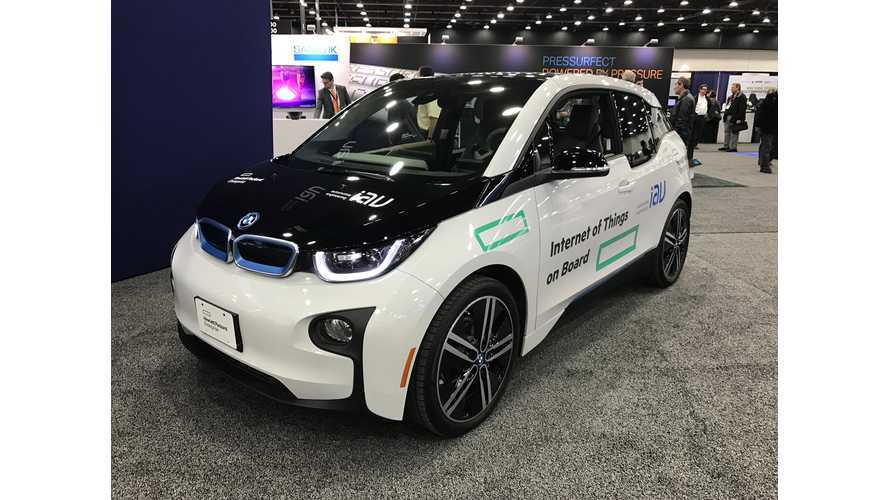 The issue is scale. Getting one car to report to the cloud that there's a pothole in the road or that it has started to rain isn't all that useful. But if you have 100 car reporting the same thing – or all the cars on the road, one day – then you're starting to get some truly interesting data and opportunities.

This is part of the vehicle-to-X (V2X) connected future that John Cooper, business development director for IAV, explained to InsideEVS at the SAE WCX conference in Detroit today. IAV brought a modified BMW i3 to the show that can sense the world around it and send that information to Hewlett-Packard Enterprise, IAV's partner in its V2X tests. Since no-one yet knows how much of the analysis for understanding all of this data will be done on the car and how much will be done in the cloud, IAV is testing both methods right now. The i3 on display uses HPE's Universal Internet of Things (IoT) platform and an HPE Edgeline micro gateway, according to press materials.

Besides the weather and road condition examples cited above, Cooper offered other real-world examples of what a hyper-connected car like IAV's i3 could do. IAV's main customers today are VW/Audi, Daimler, and BMW, so one useful trick for Europe is letting the car know when it crosses a border, so that if you leave a country where daytime running lights are not required (like Germany) and enter one where they are (Austria), your car automatically turns them on.

Cooper said that IAV is talking to the USDOT about similar settings in the US. A connected car could also talk to your smart home and figure out the status of your home charger, for example. This way, you would know before you arrive if your kid has plugged in his hand-me-down Leaf or if you'll be able to fill up right when you get home.

Of course, there's one important thing that has to happen to make these sorts of communications feasible and really open up the V2X world, Cooper said: mandated V2X components.

"The OEMs will not put them on unless they are forced do so," he said. "I'm personally not one for forcing the OEMs to do a lot, but in the case of the V2X communication, I'm a firm believer in it, because there are so many positive byproducts that could come from it."

No one really knew how smartphones could change the world, but once they were in everyone's pocket, we discovered all the different things that they could become. It's the same with connected cars, Cooper believes. "Once you have regular standard communication on all new vehicles," he said, "you will see all kinds of applications take off."