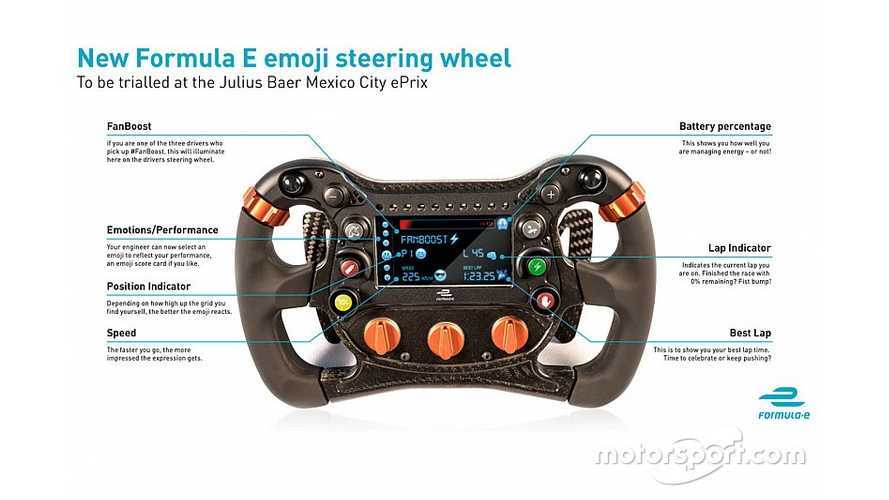 An innovative Formula E steering wheel that features emoji icons on the digital dash displays of each car will be trialled in today’s Mexican ePrix.

The groundbreaking technology will see instant emoji icons appear on the display to reflect a range of ‘virtual feelings’ that will include ‘fist bumps’ for good energy management, and other unique communications between engineer and driver.

The new initiative comes after several global sports stars, including Fernando Alonso and football star Paul Pogba, have each unveiled their own range of emojis to fans on social media recently.

Today’s trial is understood to have been personally given the thumbs up by series boss Alejandro Agag at a specially arranged meeting at the Circuit Hermanos Rodriguez on Friday morning.

The initial emoji tests will be seen in the first of the two practice sessions which is due to begin at 08.00 local time on April 1 (‘smiley face’).

Formula E should be applauded for embracing emojis. Being relevant to the current and next generations of racing fans is both pertinent and vital to stay relevant in today’s society.

The new technology will be viewed via the on-board cameras of cars, allowing television viewers instant access to the emoji data.

Formula E Holdings refused to comment on increasing paddock speculation that driver excuse emoji’s would be featured in a special post-race presentation at future events.

"We have looked at this closely," a Formula E spokesperson told Motorsport.com. "But we only have a finite amount of digital display and bandwidth available to us at circuits, so it probably won’t happen just yet."

One engineer told Motorsport.com that the latest digital innovation has come at an opportune time for one of his drivers.

“We have various emojis loaded in to the system for one of our driver, but we have already pre-programmed the ‘turd emoji’ after his recent qualifying performances,” said the engineer who expressed a desire to remain anonymous.