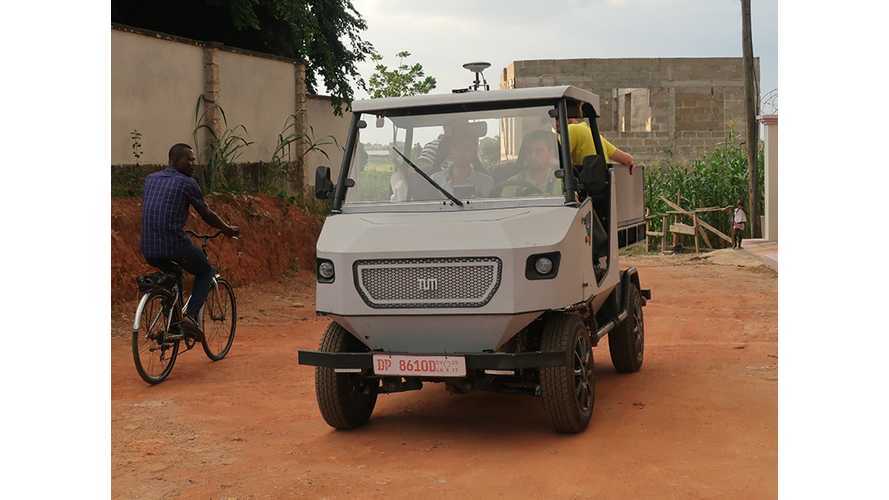 The go-anywhere, do-anything electric all-rounder is ready to traverse the desert, transport loads and power gear.

Scientists at the Technical University of Munich (TUM) are unveiling a light electric truck called the aCar (electric “all-rounder”) from the Frankfurt International Motor Show this week.

The aCar is custom-designed for sub-Saharan Africa needs, complete with all-wheel drive off-road capabilities and a solar panel roof that helps to extend range.

The truck is very light (L7e), with just two 8 kW electric motors and a 20 kWh battery, which also makes it more affordable.

Both passenger and cargo versions are planned for series production by a new company in the plug-in business - “Evum Motors GmbH”.  Most importantly, the goal is to keep the price under 10,000 Euros ($11,798 USD) for the base version.

"Mobility is a part of our everyday lives: We transport large loads, commute to work, fly to a faraway country on vacation. However, access to a vehicle of any kind is hardly a given for many people in Africa. For farmers who live far from urban centers, this means that they have no direct access to medical care, education or to political processes. They are dependent on transport contractors who bring their products to the next city for sale in order to make a living. As a result many people are leaving rural areas in search of better living conditions in the city."

“With the aCar we have developed a mobility concept that can solve these problems. The aCar is an off-road capable vehicle that is affordable for people there and is capable of transporting heavy loads. The modular structure also allows other uses for example for water treatment.” Together with the “Bayern Innovativ” campaign, the TUM launched the project “aCar mobility - Rural mobility in developing countries” in 2013. The objective was to conceive a vehicle that precisely meets the requirements of the rural population in sub-Saharan countries. The project is supported by the Bavarian Research Foundation since 2015."

The concept: One vehicle, a variety of demands

Four-wheel drive is a must for the roads of Africa, the majority of which are not paved. The team also decided on an electric power train. “An electric drive is not only greener, but is also the better solution in technical terms, since it is low-maintenance and can apply its full torque directly to accelerating from a stop,” says Martin Šoltés, who shares leadership of the project with Sascha Koberstaedt at the Chair of Automotive Technology.

The vehicle is primarily intended for transporting passengers and cargo, with a total load capacity of one ton. The battery offers a variety of other possible applications, either as an energy source or as a drive for high-consumption applications, for example as a winch. A number of various moduls have been designed for the cargo bed which can be used on a modular basis. Additional modules can turn the vehicle for example into a mobile physician's office or a water treatment station.

The 20 kWh battery capacity gives the vehicle an electric range of 80 kilometers. The battery can be loaded from an ordinary 220 volt household wall socket within 7 hours. Solar modules mounted on the roof of the aCar gather energy throughout the day. Optional solar collector sheets can be unrolled to significantly increase the amount of solar energy produced for self-contained battery charging.

“Of course we'll have to import high-tech components such as the battery and the electric motors in the beginning,” says Martin Šoltés. In future, as many of the aCar's components as possible are to be manufactured on location, in order to strengthen local economies. In order to make the automobile affordable for people on location, the price for the basic vehicle in Africa is to be kept under 10,000 Euros on a long-term basis. “Cast nodes and simple bolted construction enable simple manufacturing processes with very low investment costs,” says Prof. Wolfram Volk, head of the Chair of Metal Forming and Casting.

The scientists produced the first prototype in May 2016 and conducted initial tests in Germany. However, to make sure the aCar also meets all the demands placed on it on location, they shipped the vehicle to Ghana, where they tested the technology and concept under local conditions in July 2017.

The aCar passed all the tests with flying colors. “It spent six weeks in a container on its way there, we unloaded it, switched it on and it functioned perfectly all the way to the last day of testing,” says Sascha Koberstaedt. The team also asked locals to drive the car; they were thrilled by the “Solar car”. Another important point was testing the impact of the higher temperatures and air humidity on the electric systems. “We gathered a lot of data which we now have to evaluate,” says Koberstaedt. “But we can already say that the aCar fulfills all the necessary requirements and has even exceeded our expectations.”

In September the new prototype of the aCar will be presented at the IAA (Hall 4.1, stand A11). The car is characterized by an unembellished, clear and modern design. “The challenge was to develop an appealing, functional and high-quality vehicle, while at the same time maintaining simple production methods and low manufacturing costs,” explains Prof. Fritz Frenkler, head of the TUM Chair of Industrial Design. “Reducing everything to the essentials resulted in a modern and thus long-lasting design.”

The aCar has also undergone considerable further technical developments. The team was working among other things on optimizing weight, on electrical systems and software, acoustics and ergonomic seating and visibility.

Model factory in Germany for the first vehicles

To make sure the idea of the aCar becomes more than just an idea and actually makes it to series production, Sascha Koberstaedt and Martin Šoltés have founded the company “Evum Motors GmbH”. The first vehicles are to be manufactured in a model factory in Europe. “We'll have to master all the technical procedures before the car can be made in Africa. Then we can train people from Africa who can in turn pass on their knowledge there.”

The aCar is an electric four-wheel drive utility vehicle. These specifications make it not only excellently suited for use in Africa, but also for anyone looking for a no-emission transport solution. Thus for example it could be used in urban operation for transport purposes, in maintaining urban parks and gardens and in agricultural settings such as alpine meadows and vineyards. Compared to its competition, the purely electric aCar is significantly more cost-efficient and uses the most modern battery and power train technology.