Tesla Model 3 Depreciation Predicted To Be Lowest In Class 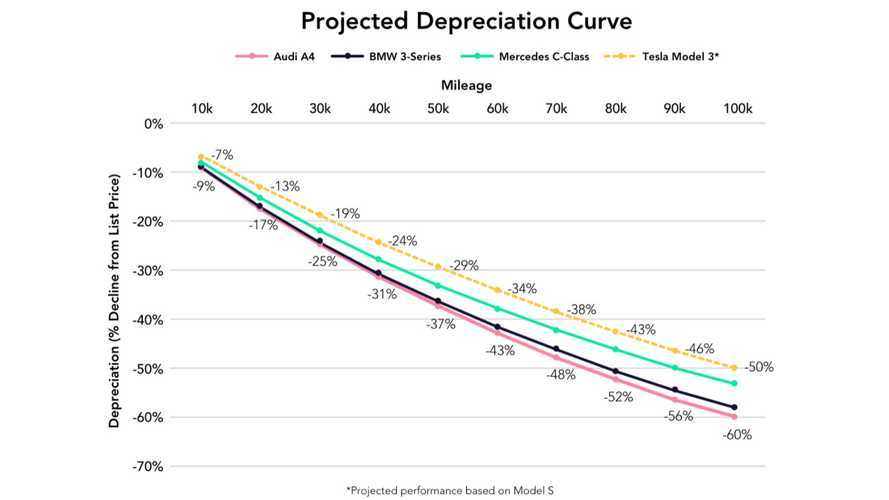 You know the worst part about buying a brand new car? Driving it off the lot of the dealership or store. It's at that moment when you're newly-acquired asset loses a good chunk of its value. Luckily for most buyers, the blunt-force trauma of this truth is significantly dulled by the sheer joy of ownership and new-car smell intoxication. Still, it's something that can come back to haunt you if, for some reason, you need to sell it shortly afterwards.

According to Autolist, Tesla Model 3 customers should, however, be able to blissfully enjoy the odoriferous release of volatile organic compounds with fewer depressing thoughts about depreciation. That's because, according to the survey they carried out with 14,476 individuals, along with analysis of five years of Model S data, they expect the newest Tesla to have the slowest and lowest depreciation in its class. That's reassuring, considering that buyers of the 3 are likely to be a little more sensitive to financial ramifications of an automobile purchase.

In numerical terms, that means your $35,000 Model 3 might still be worth $24,850 after 50,000 miles, and maybe even as much as $17,500 after 100,000 miles. That sounds like a pretty rosy forecast, but even if it's off a bit, it probably won't have much of an impact on sales. The same page on which we found this depreciation graph also contains a pie chart that slices up the reasons that cause consumers to hesitate to go electric, and guess what? Depreciation isn't among the reasons listed. Range, cost and, to a lesser extent, the lack of charging networks are listed as the most noticeable stumbling blocks. Still, for some of us, knowing we might save a couple grand at trade-in time is quite reassuring.