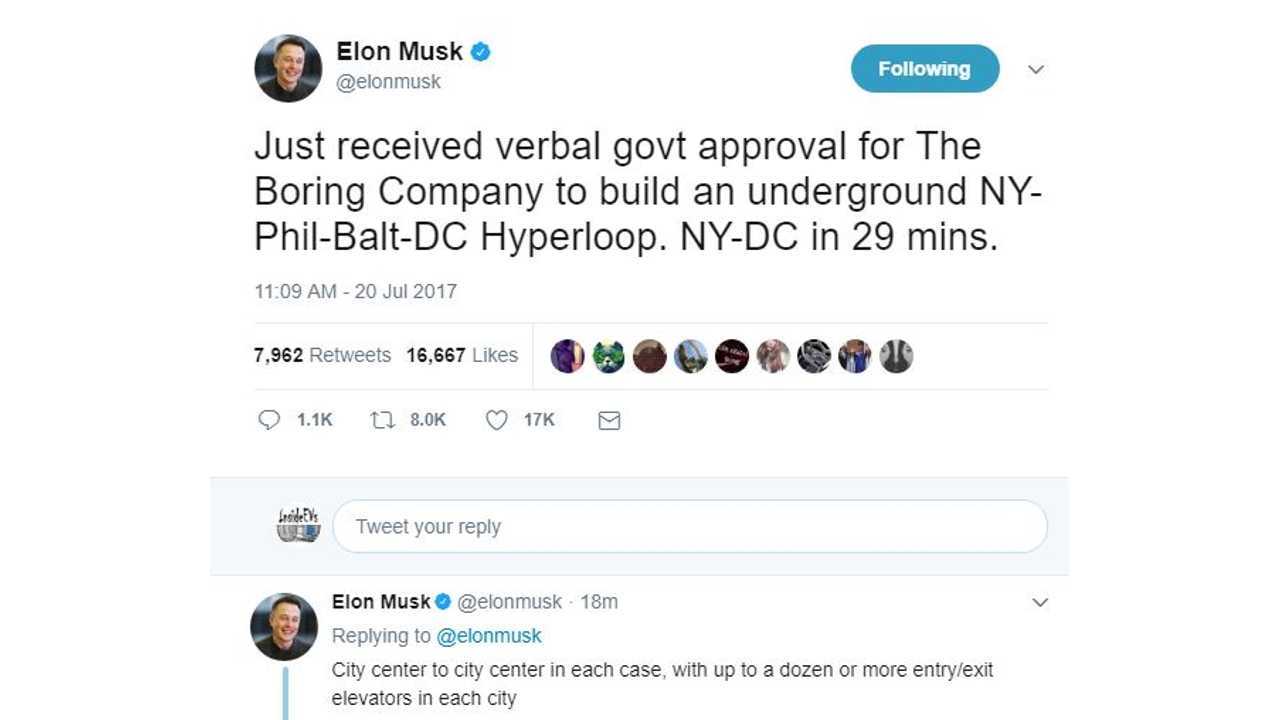 Tunnel would include connections to Philadelphia and Baltimore too.

Elon Musk has a gift for making grand announcements that take the world by surprise, and today he just made a doozy.

According to the billionaire behind Tesla and SpaceX, he has received verbal approval from the government for a project that is mind-boggling vast in scale: A set of interconnected tunnels running between New York, Philadelphia, Baltimore, and DC within which to run a Hyperloop of some sort. Speed-wise, he claims this will cut a journey from New York to Washington, DC down to a mere 29 minutes. As this plan was made public on a social networking platform that limits individual missives to 140 characters (Twitter, of course), details are understandably sparse.

The questions we have could probably fill a tunnel from NY to DC — Will this "Hyperloop" use coaches, as envisioned in that original concept, or will it use car-hauling electric sleds that we saw in a recent Boring Company video? Just who in the government gave this approval? A specific agency like the Department Of Transportation, for example, or even higher up like Donald Trump? Wasn't The Boring Company more of a hobby? Didn't Musk say he wasn't interested in creating a Hyperloop himself?

While we await answers, here are the few facts we do know. Musk says the tunnels would stretch from "city center to city center" with a dozen or so "entrance/exit elevators in each city." The Northeast plan would run parallel with the "urban congestion" work being performed in Los Angeles, California, while he also envisions a similar L.A. to San Francisco route, as well as a future loop in Texas.

While it's hard to imagine this enormous endeavor  ever reaching fruition, Elon Musk has already achieved any number of things previously thought of as impossible. Since this will no doubt also spark endless speculation, both positive and negative, if you need us, we'll be in the kitchen preparing popcorn. Lots and lots of popcorn.