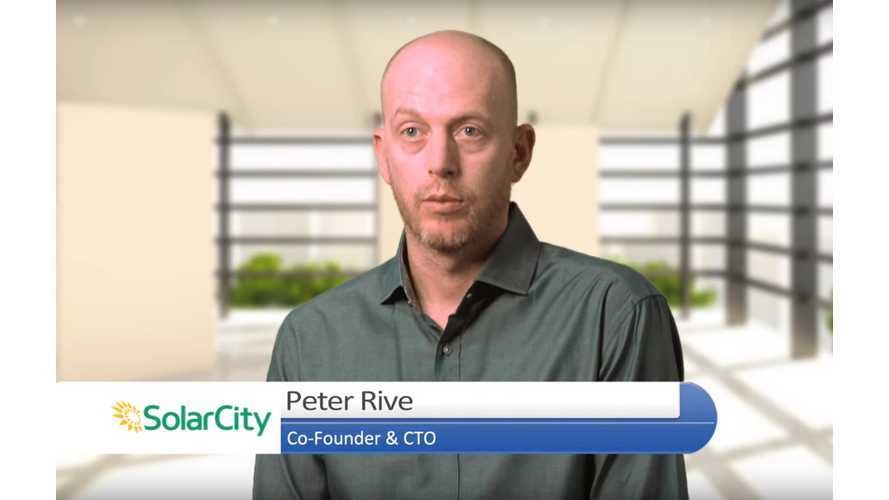 The move by the cousin of CEO Elon Musk and co-founder/former CTO of SolarCity — a company the California automaker acquired about a year ago — was confirmed to GreenTech Media by a Tesla spokesperson. The split doesn't appear to be acrimonious.

After years of helping put solar energy production on the roofs of many thousands of customers and, more recently, working on the development of the Tesla Solar Roof, Rive has decided to step away and, according to a letter circulated internally,  "...spend more time exploring the outdoors, more time with my family, and helping non-profit solar projects in the developing world."

His departure is not expected to significantly impact the continuing development of the solar roof, which should be going into production right about now, but may be behind schedule.  Tesla still has a number of engineers continuing work on the project.

His brother, Lyndon Rive, Solarcity's former CEO who also put in some time at Tesla, left in May to pursue new ventures, though there is still no word on what sort of business he may be involved in.

Here is the entire letter from Rive announcing his farewell:

After 11 years at SolarCity and most recently at Tesla, I’ve decided to take a break and focus on some other projects. Tesla is the most important company on the planet when it comes to accelerating our transition to sustainable energy, which has made my decision very difficult -- there is no other company that can be more impactful in our fight against climate change.

Work on Solar Roof is being transitioned to other Tesla engineering leaders, who are among the brightest, most accomplished on the planet. I have no doubt they will be able to execute on the plans we have for Solar Roof, which is in my opinion one of the most important products of the century.

At this point I don’t have a plan for another company. After 20 years of starting companies or helping to lead a public company, I plan to spend more time exploring the outdoors, more time with my family, and helping non-profit solar projects in the developing world.

I leave feeling proud of everything we’ve done together: we revolutionized the accessibility of solar and scaled to the point that we have over 350,000 solar systems installed -- more than any company on the planet. The future is even more exciting when you contemplate the combination of electric vehicles, storage, and solar generation, which are the critical components of a sustainable energy future. I know this is an exciting future for all of you and wish you all of the best going forward.