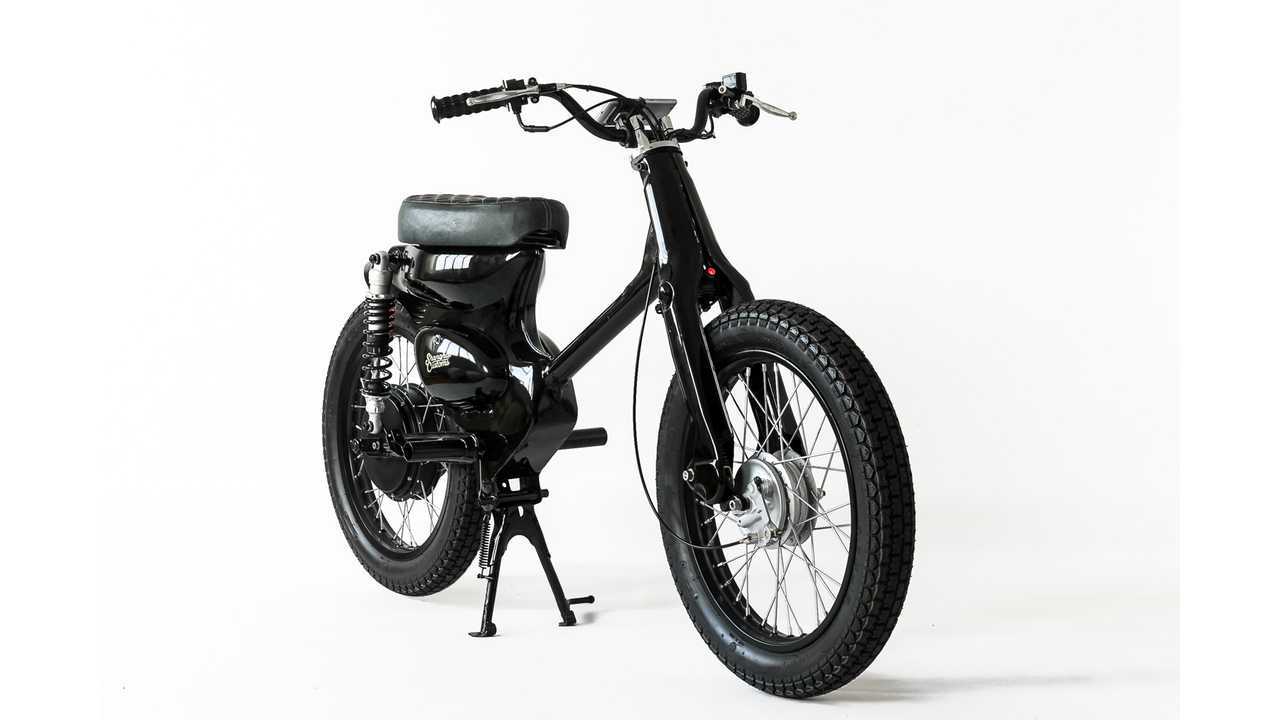 The eCub, some assembly required.

Scooter envy is indeed a rare condition in the U.S., but fears are now high of an impending outbreak. The cause? Why, it's this electrified Honda Cub by Shanghai Customs that you can see both above, and in the extensive gallery below.  Its clean lines and clever drivetrain reengineering sing a soft, worshipful hommage to the design adage: keep it simple, stupid (KISS). There is reason to believe the Pacific Ocean may block the contagion, though there are rumors an upcoming Kickstarter campaign may overwhelm even that vast geological defense.

First built in 1958, the Honda Cub is ubiquitous. By the end of the year, 100 million of them will have been sold, manufactured, as they are, in a number of countries around the world. In China, where Shanghai Customs is located, it seems like a number of companies without "Honda" in their name, also pump out volumes of the mini motorcycle. The model has endured for a number of compelling reasons, but is long overdue for its official electric update. The Japanese manufacturer says it will bring its EV-Cub to market next year, but there are no solid details about which territories it may be sold in, how much it will cost, or any performance specifications.

Which brings us back to Shanghai Customs.  The city this custom bike shop calls home now charges ¥450,000 (about US $67,550) to put plates on a gas-burning motorcycle. An electric one, ¥50 ($7.50). In many Chinese cities gas bikes are outright banned. Being experts at math and reading signs-of-the-times, it decided exploring battery-powered bikes would be a smart move, and to that end, built its first electric prototype: the eTracker (right). Though busy at getting this first design into production — changes will include a mid-drive setup instead of an in-wheel motor — it found time to tinker with what it has come to call the eCub.

Boasting a 2 kW hub motor on a customized swingarm, and a Kelly controller modulating the output of a 1.2 kWh battery pack, the eCub can, on relatively flat terrain, carry an 80-kg (176-lb) rider 50 km (31 miles) at 50 kph (31 mph), while being capable of hitting speeds in excess of 80 kph (50 mph). All this while keeping componentry and wiring hidden snugly away.

If you were hoping to cure your freshly diagnosed case of scooter envy by writing them a cheque, sitting back and waiting for a delivery truck to roll up to your door, you're out of luck. They aren't making turnkey examples of the eCub. Instead, they are putting together kits that will include most of what you need to fashion your own, including a motor, controller, swingarm and other bits. We expect complete details to be forthcoming in a few weeks when they launch a Kickstarter campaign to gauge demand and put financing in place. While we wait for that news, we suggest getting an early start and begin perusing the 'net for used Passports, as they were marketed as here. Good luck!