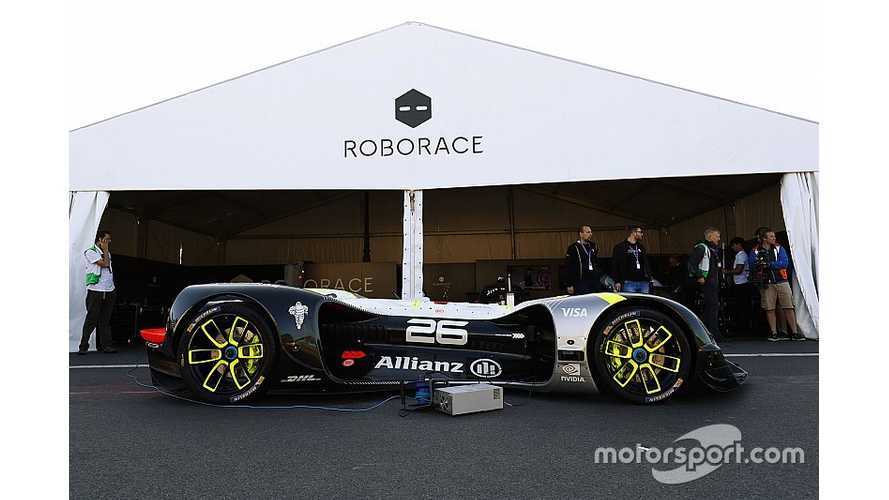 The Russian-backed initiative has partnered with Formula E to showcase the development of the first driverless racing car series.

At several races this season Roborace has run a test mule known as DevBot, which includes a cockpit so a human driver could aid the development, but it has brought the first version of its completely driverless car to an event for the first time.

The Robocar emerged on track shortly after the end of FP1, carrying out one lap at very slow speed. Its lap was punctuated by a short stationary spell parked up by the barriers.

Roborace chief technology officer Bryn Balcombe explained this was because “we were checking the accuracy of the line round Turn 8”.

He told Motorsport.com: “It got within a couple of millimetres of the barrier and that’s a bit too tight for the safety margin! We’re changing that line at the moment just to make sure it doesn’t get as close.

“The car is in its own sensing state, learning the environment. We had a vehicle following behind, but that’s just a safety mechanism.”

The car is due to run again after qualifying in similar fashion to this morning, and the intention is to run it without the need for a following vehicle.

Roborace was not present at the Monaco ePrix last week while it carried out its final software development ahead of Saturday’s demonstration in Paris.

It has been testing in private for three weeks, including on a purpose-built Formula E replica track that Balcombe says allows the team to “get the sensory perception correct and be training in the right environment”.

“We’ve done loads of testing in the background so it’s kind of strange, people come up and say ‘you’ve changed the world today’ and we feel like we did that a few weeks ago,” he added.

“It’s a big event and to show it in public is really important to us. We’ve still got a lot of work to do before this afternoon, but it’s great to be focusing on that and not the technical side. We’ve proven that now.”