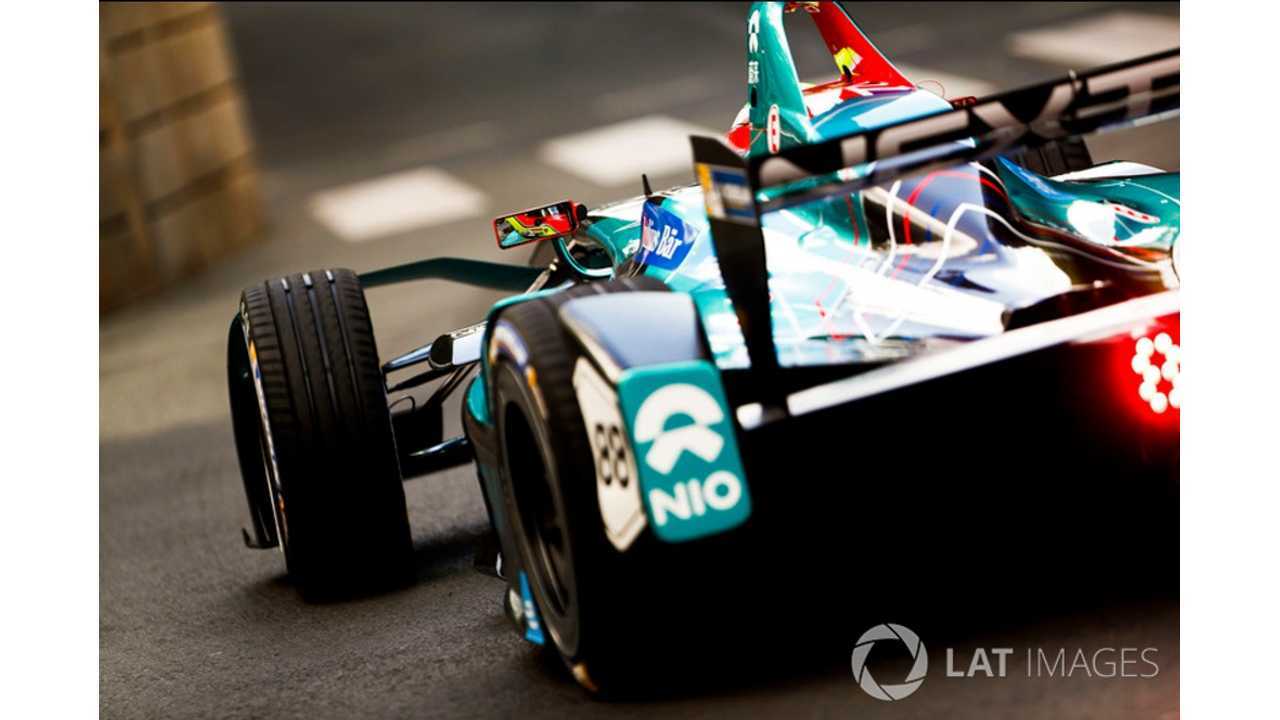 Sebastien Buemi claimed his fifth victory of the season as his chief pursuer Jean-Eric Vergne and Formula E title rival Lucas di Grassi both crashed out of the Paris ePrix.

Buemi was managing a threat from Vergne in the second half of the race when the Frenchman crumpled his Techeetah entry into the wall exiting the penultimate corner.

That promoted DS Virgin rookie Jose Maria Lopez, already on course for a first podium, to a best-ever finish of second, while Nick Heidfeld inherited third.

Buemi withstood an attack from Vergne on the outside into Turn 1, then eased clear of the chasing pack.

Checking out the scenes in Paris (Adam Carroll, Jaguar Racing via LAT Images)

He had nudged his lead north of three seconds for the first time when di Grassi came together with Antonio Felix da Costa at Turn 7 on lap 20 of 49.

Di Grassi had been attacking da Costa for 13th and passed the Andretti driver on the outside, then moved across for the apex – where he was hit by the Portuguese, who kept his nose just on the inside.

That speared both into the barriers, although di Grassi was able to rejoin and make it back to the pits as a full-course yellow was thrown with da Costa’s car stuck.

This triggered a host of slightly early car swaps, although when racing resumed on lap 23 Mike Conway, who did not pit, held a false lead for three laps.

When he stopped Buemi moved to the front again, only this time his lead over Vergne was little more than a second.

Buemi was extending his advantage when Vergne ran wide exiting Turn 13 on lap 34 and crashed into the wall and triggered a real safety car.

Lopez inherited second and was keeping the pressure on Buemi until di Grassi crashed at Turn 8 two laps from the end and brought out another safety car.

By this stage di Grassi was just pushing for fastest lap, having picked up a drivethrough penalty for far too short a pitstop when he swapped cars after his first crash.

The upshot was an anticlimactic end to a chaotic race, with Buemi – whose lead over di Grassi is now 43 points – heading home Lopez, Heidfeld, Felix Rosenqvist, Robin Frijns and Nico Prost.

didn’t know how to race” in today's Formula E race in Parie, but da Costa would claim he was just a “passenger” in their crash." draggable="false">

Them's fighting words! Lucas di Grassi said that Antonio Felix da Costa “didn’t know how to race” in today's Formula E race in Parie, but da Costa would claim he was just a “passenger” in their crash.

There was an enormous gap after the lead sextet at the flag, because seventh-placed Daniel Abt suffered a car problem on the final lap and slowed dramatically on the back straight – with those behind him reluctant to overtake under yellow flags.

This was a massive boost for Frijns, who picked up a five-second penalty for speeding under the earlier full-course yellow but only dropped to sixth when it was applied.

Abt’s drama promoted Techeetah’s Esteban Gutierrez to seventh at the flag, but his own five-second penalty for a full-course yellow infringement dropped him to 12th.

This handed Nelson Piquet Jr seventh and debutant Tom Dillmann eighth, and also guaranteed a third-straight points finish for Jaguar and Evans, who should have been in the top six but lost a huge amount of time swapping cars.

Stephane Sarrazin picked up the final point in 10th having started from last.