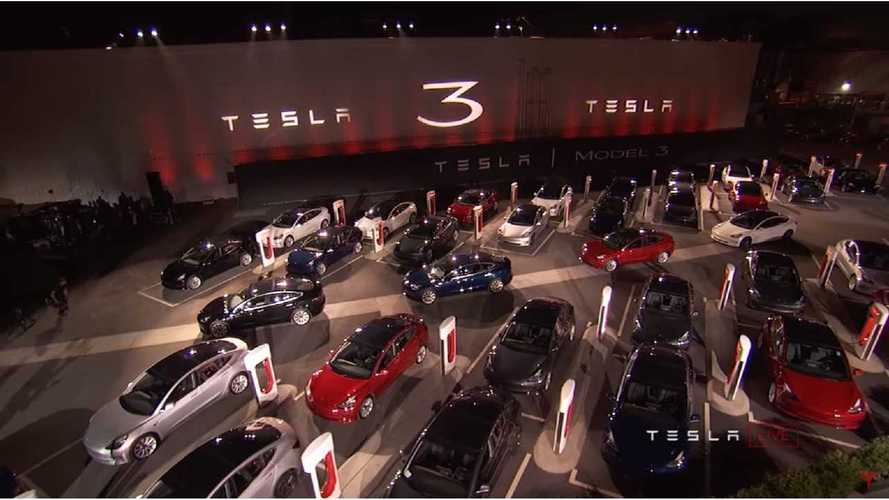 It really comes as no surprise that once again, Tesla raised more money than planned with its recent high-yield junk bond offering.

Last week, Tesla set out to raise another $1.5 billion last week via a debt offering. The company aimed to cover the amount through the sale of senior unsecured debt obligations:

"The issuer will use the net proceeds from this offering to further strengthen its balance sheet during a period of rapid scaling with the launch of Model 3, and for general corporate purposes."

The crowd packed in at the recent Tesla Model 3 handover event.

Just prior to the sale, Tesla reported during its Q2 earnings call that it had a cash balance just over $3.0 billion, and explained that this should be enough to head into Model 3 production:

“Cash balance of slightly over $3.0 billion at the end of Q2, plus expected cash generated from operations in the second half of 2017, provide sufficient liquidity to fund our capex projections, and provide flexibility through the Model 3 ramp.”

However, having access to an additional $1.5 billion as another safety net is surely welcome:

“Capital expenditures should be about $2 billion during the second half of 2017, as we make milestone-based payments for Model 3 equipment, continue with Gigafactory 1 construction, and expand our Supercharger, store, delivery hub, and service networks.”

All said and done now, Tesla raised a whopping $1.8 billion from the sale last week, accounting for about $300 million more than anticipated, with a yield of 5.30 percent, which is also above the original estimate of 5.25 percent. The eight-year bonds, which were rated negative B by S&P and B3 by Moody's, were primarily underwritten by Goldman Sachs.

Regardless of Tesla's reputation on some levels and among some analysts and competitors, there is no doubt as to the company's intense level of support. Obviously, a significant group of investors have ultimate faith in the company, and Tesla has had no issue with any of its fundraising efforts. Larry McDonald, author of The Bear Traps Report newsletter, exclaimed:

" speaks to the sheer insanity found in the high-yield market to have a deal like this upsized with terms so unappealing to investors. The deck is stacked for Tesla in bond deal terms, congrats to Elon Musk."

Despite these observations, there must to come a time that the Silicon Valley automaker moves forward without the need for more and more. Otherwise, Tesla's reputation stands to decline. Efraim Levy of CFRA shared:

"It was well-received. In a large extent it does show that people are interested in the bonds of the company because they believe in the long-term growth ... story."

Of interest:  With the political unrest of late, some investors have already grown a bit leery of the low yield on these bonds, as Bloomberg reported Friday (August 18th) that the bonds are already trading under par:

"The company’s $1.8 billion of 5.3 percent notes due 2025 slipped below par almost immediately, trading as low as 97.4 cents on the dollar on Friday, according to data compiled by Bloomberg. The eight-year securities had priced a week ago at a record-low yield for a bond of its rating and maturity -- a touch higher than initial talk of 5.25 percent -- and Tesla had added $300 million to the offering to meet demand."

PALO ALTO, Calif., Aug. 07, 2017 (GLOBE NEWSWIRE) — Tesla today announced that it intends to offer, subject to market and other conditions, $1.5 billion in aggregate principal amount of its senior notes due 2025 (the “Notes”). The Notes will be senior unsecured debt obligations of Tesla. The interest rate, redemption prices and other terms of the Notes are to be determined.

Tesla intends to use the net proceeds from this offering to further strengthen its balance sheet during this period of rapid scaling with the launch of Model 3, and for general corporate purposes.