Infiniti Prototype 9 EV Is Past Meets Present, Plus Some Next-Gen LEAF 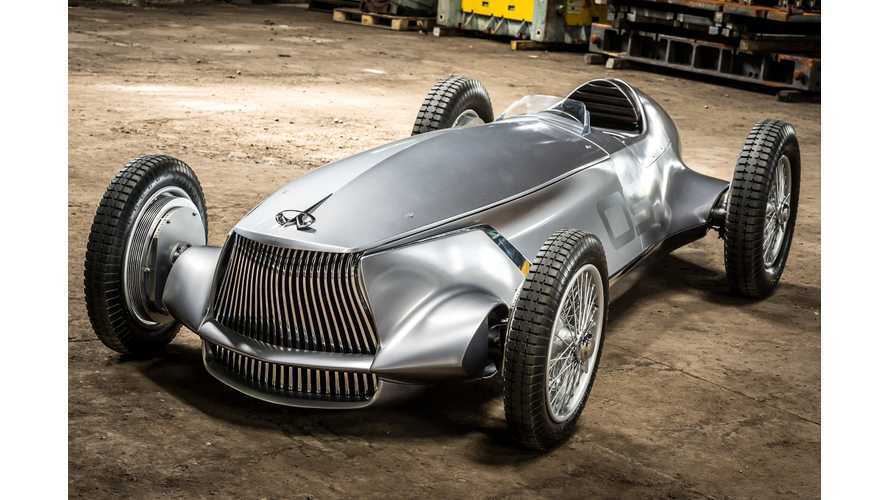 Minus the bigger battery, underneath is a fully electric powertrain that can be found in the next-generation 2018 Nissan LEAF.

Like so many storied manufacturers with a rich and long standing racing history, Infiniti is revisiting its past at the upcoming Pebble Beach Concours d’ Elegance with a very delectable looking concept vehicle. Beautifully crafted to resemble the manufacturer’s vintage racing machines of the 1930s, this exquisite retro racer captures everything great about Infiniti’s distant past, but with a modern twist. More on that in a moment.

But first, there’s one major problem. Infiniti was born in 1989 so it doesn’t have a distant past. Nor does it have a long standing racing history, never mind something that is even remotely close to the glorious cars of the 1930s. So what’s with this snazzy depression-era prototype?

“It started as a simple thought,” said Alfonso Albaisa, Infiniti’s senior vice president of global design. “What if we found a car, down at the southern tip of Japan, buried deep in the barn, hidden from all eyes for 70 years? What if in this car we found the seed of passion planted during our first Japanese Grand Prix and the power and artistry of Infiniti today? What would this discovery look like?”

It would look like this, which according to a behind-the-scenes take from Motor Trend is called Prototype 9. It was something of an unexpected endeavor from the automaker’s Atsugi deisgn studio in Japan that was given life after managers from Nissan’s Oppama factory saw it. Nissan’s Autech division also got involved, creating a specialty build team using a combination of modern manufacturing processes with traditional hand forming and assembly. For example, the wonderfully arched aluminum tail was shaped by hand, but mounted on a grid of laser-cut steel. Isn't that neat?

Old-meets-new continues with the powertrain. It features an all-electric setup not unlike what you’d find in the Nissan Leaf, with a rear-mounted motor generating 148 horsepower. That may not sound like much, but with only 1,962 pounds to handle, Infiniti says it will hit 60 miles per hour in 5.5 seconds. Considering the car’s underpinnings consist of leaf springs and solid axles – not to mention the period-correct narrow tires – it must be quite lively to drive.

Infiniti will be officially taking the wraps off this achingly pretty prototype next week at Pebble Beach, and we suspect it will look even better in person than it does in photos.