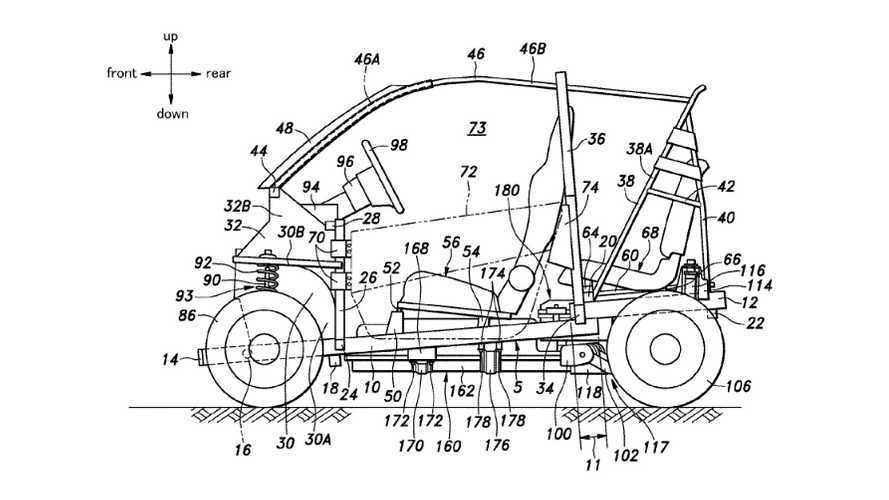 By: Sebastian Blanco
A patent for a "four wheel vehicle" is just about as broad as you could ever dream up, outside of a patent for a "thing." Nontheless, Honda has filed just such a patent application, and it looks like the automaker is gearing up for another tiny electric vehicle project. The patent application says that it is for, "The present invention relates to a four wheel vehicle, and in particular but not exclusively to a four wheel vehicle including an electric motor for propelling the vehicle and a battery unit for providing electric current to the electric motor," but the images attached to the filing give away what's really going on here. See them above and below.

Honda Micro Commuter Prototype is Micro...That's For Sure

The drawings hint at an updated version of either Honda's Micro Commuter or the similar MC-β EV. Both of these vehicles were small, two-seat electric vehicles that were never produced in great numbers and were instead used for small field trials and to make appearances at auto shows. This new vehicle is designed to be, "mechanically strong, simple in structure and light in weight while requiring a minimum number of component parts." There's a hint of the Renault Twizy in the way the patent describes and illustrates the new EV:

In other words, it's meant to be safe and quirky.

We've asked Honda for any sort of information about what this patent might actually be about, but have not yet heard back. We will update you if we learn anything cool.