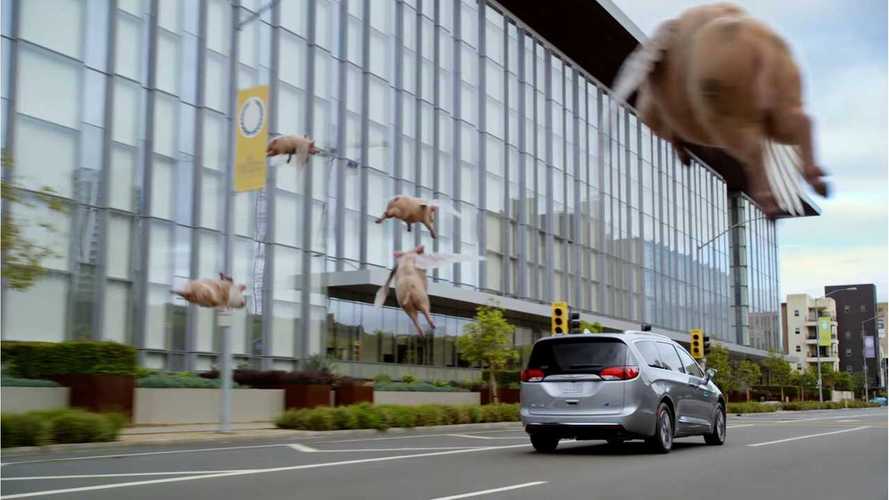 The all-new Chrysler Pacifica Hybrid is literally in a class of its own, making it possibly the most versatile family-hauling plug-in hybrid to date.

Today we view a very rare occurrence. It's not often that we get an opportunity to see pigs fly, or watch hell freezing over. But, thanks to FCA we get both in under a minute.

Chrysler is in a bit of a different boat than some of today's other automakers in regards to its Chrysler Pacifica Hybrid. While other companies are often accused of making compliance cars, or marketing vehicles to only specific areas (CARB states), the new plug-in hybrid minivan (with 33 miles of all-electric range) is a vehicle for the masses.

FCA knows that people are enamored with its minivan. Heck, it is one of few companies left that makes a successful minivan, and the automaker has to get its current customer base to believe in the new electrified model.

What's stopping the average family from trading in their current Town and Country or Caravan and getting an ICE Pacifica? It's cheaper, and it's wooing the critics and taking home substantial awards.

Chrysler needs to get its minivan customers, aside from EV enthusiasts, to buy in - and it will prove no easy task. Good, solid, entertaining advertising that educates the masses, may be the only saving grace. Front and center in the ad is the Pacifica's 84 MPGe, which should appeal to anyone. Also mentioned is the best in class cargo capacity (not mentioned is the eliminated Stow n' Go seating), but apparently even without that extra space, the Chrysler Pacifica Hybrid is only exceeded by the non-hybrid Pacifica in the cargo department (fact checking shows that the Honda Odyssey and the Toyota Sienna both have more cargo capacity in every measurement, than oth the ICE and plug-in Pacifica). Hopefully the masses don't do their homework.

If Chrysler can use advertising to do a better job getting consumers to look at the Chrysler Pacifica Hybrid - than those poor kids did in getting their parents attention - then maybe the automaker will succeed in selling the new offering.

With seating for seven, 84 MPGe and 566 miles of total driving range, the All-New Chrysler Pacifica Hybrid is unprecedented. Some things you have to see to believe.

Check out a few more Chrysler Pacifica Hybrid commercials below (educating the public using celebrities and kids is always a good choice):