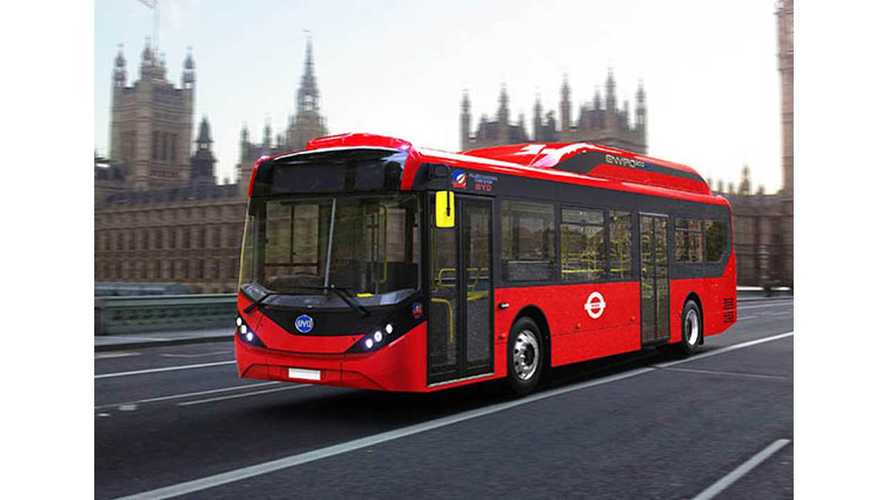 BYD and ADL haven't been resting this summer, instead they have secured orders for nearly 100 electric buses in London - a huge result to be sure.

With more tenders to come, it's possible for BYD to cross the 100 mark (for one city, in one year) for the very first time in Europe.

"Eleven of the buses will operate on Transport for London’s route 153 from February 2018 A further 19 electric buses will operate route 214 from August 2019. All will be based at Go-Ahead London’s Northumberland Park in North London which will be equipped with BYD supplied charging equipment.

The new order means that Go-Ahead London will have in service a total of 95 BYD ADL pure electric buses based at three depots – Waterloo, Camberwell and Northumberland Park."

"We are without doubt the pre-eminent operator of electric buses in London and have accrued significant experience of their operation. The fact is that the BYD ADL products have proved themselves capable of replacing diesel buses without any operational impact in terms of daily scheduling. Careful planning of the depot recharge facilities and infrastructure is of course necessary but we have no need to use any opportunity charging".

"The strength of the combined BYD ADL offer is now clear for all to see. Go-Ahead London’s initial fleet of 51 has been in operation for almost 10 months now, operating reliably and effecti vely day in, day out. No further trials are necessary – these products deli ver outstanding efficiency and environmental benefits today and we are optimistic of further significant orders".

"There can be no excuses now. Faced with the air quality crisis, city transport authorities and operators across the UK can confidently order the BYD ADL Envi ro200EV at whatever length suits them secure in the knowledge that our product works well and can replace diesel buses without operational compromises."

"Metroline is the latest London operator to win a tender from TfL to operate electric buses on a central London route and has chosen the ADL BYD partnership to supply 23 of its 10.8m single decker model.

The new buses, due for delivery in Summer 2018, will be based at Metroline’s Holloway garage in north London to operate on Route 46 from Lancaster Gate station to St Bartholomew’s Hospital. BYD will supply charging equipment at Holloway and, in association with SSE, work with Metroline on related infrastructure.

Metroline has been operating five BYD pure electric double deckers, the world’s first, on Route 98 since May 2016. The buses, built in China and unveiled during Chinese President Xi’s historic visit to Britain in 2015, are pre-production pilot models which have proved that electric technology works on double as well as single deck buses."