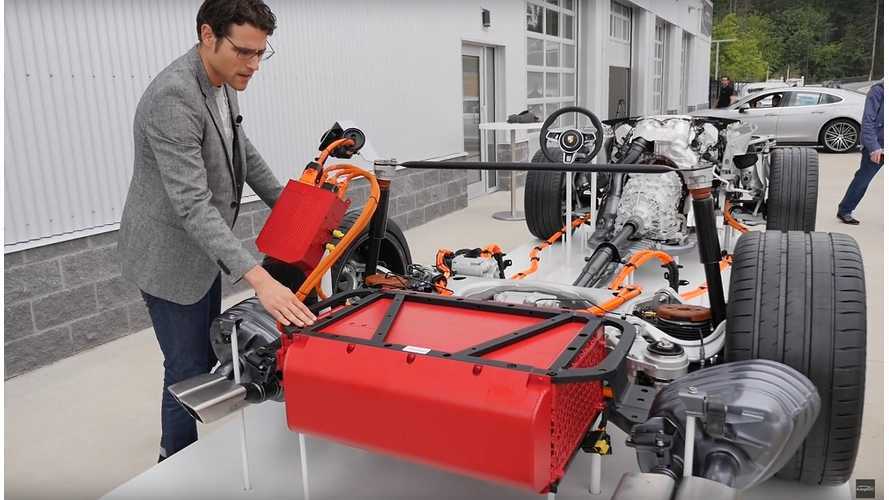 The most powerful and quickest Porsche Panamera ever, the new Panamera Turbo S E-Hybrid was recently extensively covered by the Autogefühl.  And by extensive, we mean extensive...even by Autogefühl's standards - clocking in at 45 minutes!

The detailed walk-through, besides covering the exterior, interior and driving experience, also includes a test on the race track, and exploring a cutaway skeleton of the Porsche.

Porsche has been exploring the plug-in hybrid Panamera for quite some time now, as the Panamera S E-Hybrid entered the U.S. market in 2013 (and have sold 1,774 were sold so far).

About year ago, German manufacturer refreshed the Panamera S E-Hybrid with new Panamera 4 E-Hybrid, equipped with a 14.1 kWh battery (in place of the former/smaller 9.4 kWh pack). That model had a 2.9-litre V6.

A long-wheelbase Panamera 4 E-Hybrid Executive then appeared shortly thereafter, and noe for 2018 with have a 4.0-litre V8 Panamera Turbo S E-Hybrid with more power (see report from Geneva).

Unfortunately for the US, there was no 2017 model year cars, and the 2018s haven't yet arrive (but will shortly), which opened up a vacuum of inventory since November of 2016.

For us, the real pleasure was hearing at the end of review that driving in pure electric mode is more fun than hammering the V8 on the track. If only Porsche would hear that too, and extend the all-electric mode capabilities more instead of enlarging engine size...ah well, the all-electric Porsche Mission E is still coming in ~18 months or so.