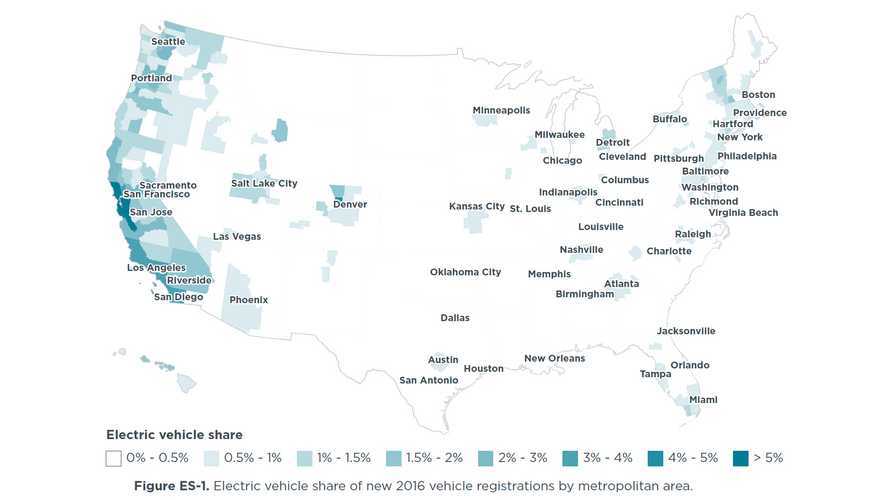 The International Council on Clean Transportation (ICCT) released an interesting report earlier this year entitled "Expanding the electric vehicle market in U.S. cities", which assesses the plug-in market in the 50 most populous U.S. metropolitan areas.

Annual electric vehicle sales in the United States from 2010 through 2016. (source: ICCT)

The analysis of the top 50 hot-spots is important because they combine to represent 81% of the plug-in electric car sales made last year.

As you can see on above graph (with the top 50 labeled), plug-ins market share is highest on the West Coast.

"This paper assesses the U.S. electric vehicle market and the actions driving it. The assessment catalogues actions in place, identifies exemplary practices, and discerns links between various electric vehicle promotion actions and electric vehicle sales. The analysis focuses on the 50 most populous metropolitan areas, which together represented about 81% of the 2016 U.S. electric vehicle market. The work statistically analyzes the connections among various state and local policies, public and workplace charging infrastructure, consumer incentives, model availability, and the share of new vehicles that are plug-in electric (both fully electric and plug-in hybrid).

On the basis of extensive local-level data collection, we conducted a statistical analysis to assess the link between key electric vehicle support activities and market uptake at the metropolitan-area level. In particular, we analyzed whether electric vehicle market share is linked with the availability of more electric vehicle models, charging infrastructure, fiscal and nonfiscal incentives, high-occupancy vehicle lane access, and other activities. Our analysis leads us to the following four conclusions.

Our analysis leads us to the following four conclusions:

Growth in the electric vehicle market requires many actions by many players. Actions by many local, state, and utility stakeholders work to reduce consumer barriers by means of policy, incentives, and awareness campaigns. Such a comprehensive approach is exemplified by California, where the Zero Emission Vehicle regulation helps to catalyze automaker marketing and model availability, complementary policy incentives, and sustained investment in charging infrastructure.

Expansion of electric vehicle options is a prerequisite to market growth. The five leading electric vehicle markets by volume, representing nearly half of all U.S. electric vehicle sales, each had at least 24 available electric vehicle models in 2016. Yet across the major U.S. markets, about half of the population has access to 10 or fewer electric models, and many dealerships have very low inventories of those models. Availability of more models across vehicle types, offered at a range of price points and passenger capacities, is an essential precursor to more substantial market development.