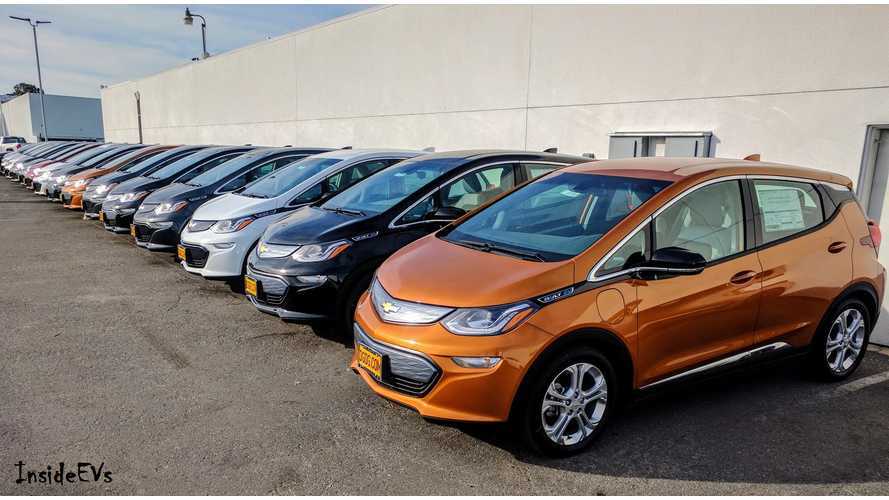 National inventory of the Chevy Bolt EV jumped from about 1,000 units in March, to more than 4,000 by April's end (Bolt EVs outside Capital Chevrolet in San Jose/George B)

The first quarter of Chevrolet Bolt EV sales in the US for 2017 was a bit anti-climatic, as inventories remained very low in March, with GM's production focused on bringing the 238 mile EV to Europe under Opel Ampera-E badging.

GM even took time to mention last quarter that dealer stock was limited, and the "days to turn is exceptionally low at 14 days".

Maven to expand L.A. car-sharing and ridesharing services by introducing the Chevrolet Bolt EV to the fleet.

That all changed in April on the inventory side of the equation, as we noted in week 2 of the month that national reserves of the Bolt EV in America quadrupled (to ~4,000 units); and with that, we anticipated much higher sales numbers.

Unfortunately those sales did not materialize, and it is difficult to put a positive spin on April's result for the EV.

We should note that the almost 1,300 units sold is still a personal best for the Bolt EV, with the previous high coming this past January (1,162).  What is the reason behind the lower than expected numbers so far?   It is perhaps a case of the American public once again rejecting a small car offering, but only time will tell the story clearly at this point.

As for the Bolt EV's "mini-competition" with the other major new offering for 2017, the Toyota Prius Prime; the Prime moved 1,819 copies in April (also a personal best)...but from an average inventory of less than 1,000 units.  We can probably now declare that the Prius Prime will be the best selling plug-in newcomer in the US for 2017 - that is, depending on how quickly Tesla can ramp Model 3 production in Q3.

During April, the Bolt EV also arrived in Washington for the first time, bringing the availability of the electric car officially up to 8 states.

Although we did see some inventory managed to find its way into other states originally planned for a May introduction (CT, ME, VT, RI, NH and CO).

Meanwhile, the Chevrolet Volt continues to be the runaway best selling plug-in for GM.

However, the 53 mile extended range car did have some trouble in April, and failed to best its year-over-year comps for first time in the 2nd generation's sophomore season on the US market.

Also, we would be remise to not mention the all-new Cadillac CT6 Plug-In Hybrid.