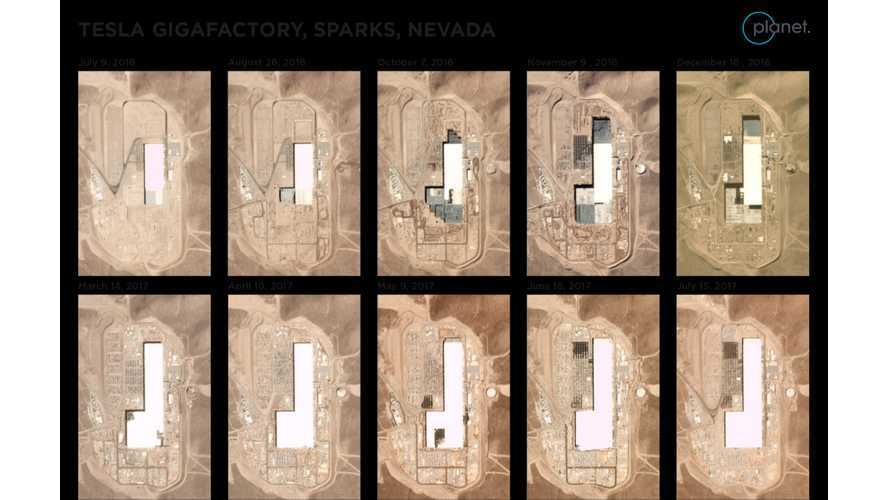 Genscape, a company that tracks hundreds of industrial facilities in real-time, using proprietary monitoring, is also watching the progress of Tesla's Gigafactory near Reno, Nevada.

Above we have embed the video with the construction of the Tesla Gigafactory from June 1, 2016 Through July 18, 2017, so it's pretty clear indication of what has happened, and where the facility is at today.

The big value however comes from Genscape estimations of the daily battery production and electric power consumption.

According to the graph posted below, Tesla doesn't yet produce Model 3 batteries in a continuous fashion. Summing all the graphs together, it seems that ~1,500 packs have left the building through the first week of July.

"Genscape has the real-time answers on how effectively Tesla is executing on its ambitious goals. Using an array of patented proprietary monitoring techniques, Genscape is tracking and estimating the daily battery production at the Tesla Gigafactory that is fueling the Model 3 electric vehicle production ramp-up at Tesla's Fremont Vehicle Plant.

In addition to monitoring battery pack production, Genscape is also measuring the ramp-up in electric power consumption by the Tesla Gigafactory as construction progresses and additional battery production lines are brought online and tested. Genscape is closely watching ongoing construction progress of the massive modular facility, via daily satellite imagery courtesy of Planet Labs, and making all the real-time information gathered from various independent monitoring sources available to its customers."

Genscape's average weekly power consumption estimate at the Tesla Gigafactory from May 8 to July 10, 2017 (source: Genscape)