The Time Is Coming For A Porsche And Tesla Rivalry 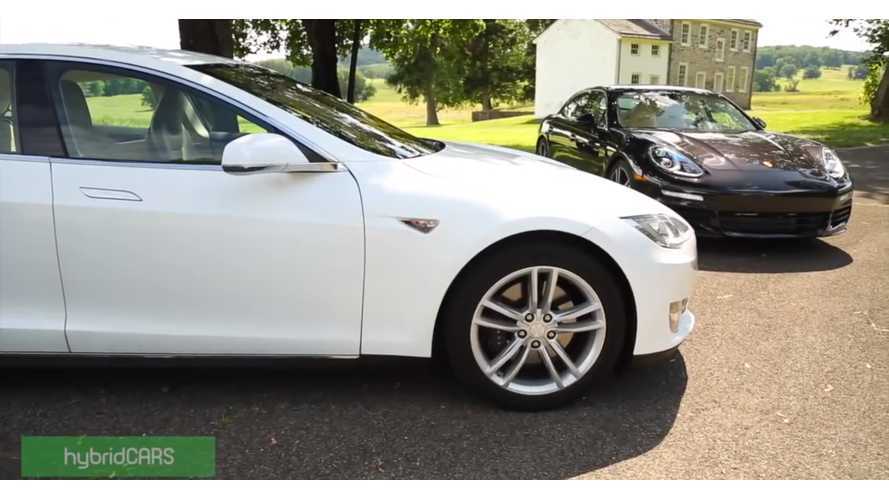 A RIVALRY IS BREWING BETWEEN PORSCHE AND TESLA

Classic rivalries - PC vs Mac, Beatles vs Stones, Tennessee Vols vs Florida Gators - are a good thing, energizing the fans and encouraging the players to bring their best games to the field. A healthy rivalry seems to be developing between Tesla and Porsche.

At the visceral level of the drag strip, the two are natural competitors - the Model S P100D with Ludicrous Plus and the Porsche 918 Spyder are, by most accounts, just about the two quickest production cars out there. Independent tests put their 0-60 times (2.2 to 2.3 seconds - see Wikipedia and Zeroto60Times.com) within a tenth of a second or so, so it’s anybody’s guess which one is going to win on a given track on a given day. There are plenty of videos of head-to-head match-ups for those who like to watch.

Just a couple of years ago, Porsche execs were saying that an electric car couldn’t offer the level of performance that their customers expect.

Above: When a Porsche tries to keep up with a Tesla (Instagram: teszila)

Well, the company has changed its tune since then. Current CEO Oliver Blume recently said that he expects half of Porsche’s production to be electric by 2023. Porsche’s first all-electric vehicle, the Mission E, is expected to go into production in 2019, and the company is investing large sums at its Zuffenhausen plant. The company says it will have “over 310 miles of range” (presumably on the New European Driving Cycle, more generous than the EPA’s rating system), a 0-60 time of 3.5 seconds, and a new 800-volt charging system that will be able to charge to 80% in 15 minutes (and could also work with Teslas). Specs like these would make it a worthy competitor for Model S.

Porsche is also planning a second all-electric vehicle based on the Macan crossover. Blume recently told German business site manager magazin that his company plans to produce 60,000 units per year between the two vehicles - an impressive number considering that Porsche’s total 2016 production was around 230,000. And as Porsche moves closer to launching its electric vehicles, the company is now considering the possibility of ditching its diesel program altogether.

A look at the Porsche Mission E concept car

With a high-performance sedan and a luxury crossover aimed squarely at Tesla’s Models S and X - and, more importantly, the will to sell them in quantity - Porsche could prove a formidable rival indeed.

Tesla and Porsche also have some things in common in the financial realm: both enjoy relatively high gross margins (the amount of money earned on each car sold), and both have grown quickly (or in Tesla’s case, explosively) by the standards of the auto industry.

“Tesla has the potential to achieve sustainable gross margins...double those of US peers comparable to those of high-end German auto brands, while growing more like a rapidly advancing Chinese automaker.” He noted that if Tesla can sustain its 2016 gross margin of 25 percent, that “would place it above BMW and Mercedes and just below Porsche.”

Calling Tesla “an extreme growth story,” Galliers wrote, “To put Tesla’s growth in context, we note it took Porsche 10 years and four product lines to grow from around 35,000 units to over 100,000. Tesla is on course to achieve similar growth in only 3 years.”