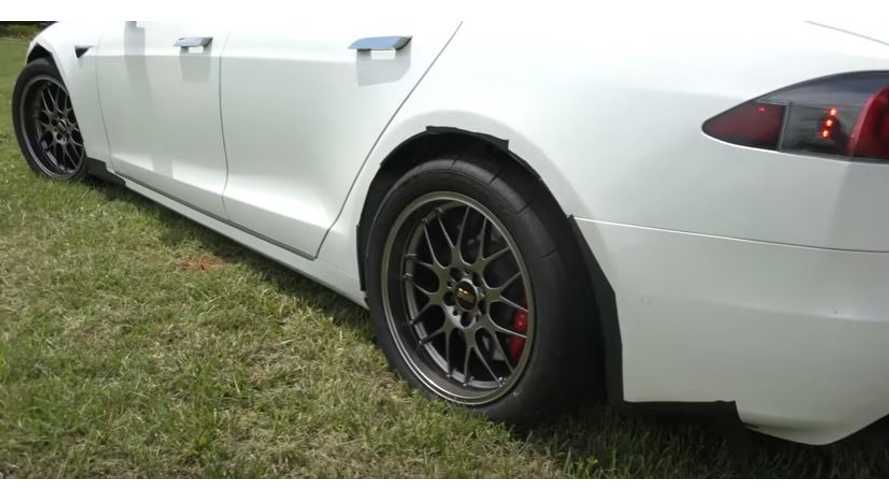 It's stripped down, so this Tesla Model S is likely even quicker from 0 to 60 MPH than 2.28 seconds, if you can imagine that!

Famed Tesla Racing Channel on YouTube is behind this highly modded Tesla Model S P100D with Ludicrous. This certainly is no stock Tesla.

The frunk is gone, the interior...gone. The wheels swapped out with a wider set with some race rubber. The list of modifications go on and on.

"BBS Wheels wrapped in a set of Mickey Thompson drag radials really set off the looks of this Tesla P100D. It looks meaner than ever, distracting from what's hidden inside. That is...two Kirkey Aluminum Racing seats and nothing else except for the drivers door panel. The cars frunk and trunk have been almost completely stripped. There's definitely some more weight to get out, stayed tuned to see the racing this beast has done."

We figure a good few hundred pounds has been removed from this racing machine, but as Tesla Racing Channel suggests, more poundage can be trimmed.

Though we don't have a documented 0 to 60 MPH time for this modded Model S (here's its recent 1/4-mile record run), we can safely assume it's quicker than the 2.27-second time hinted at by Musk in this floor-mat-less Tweet: