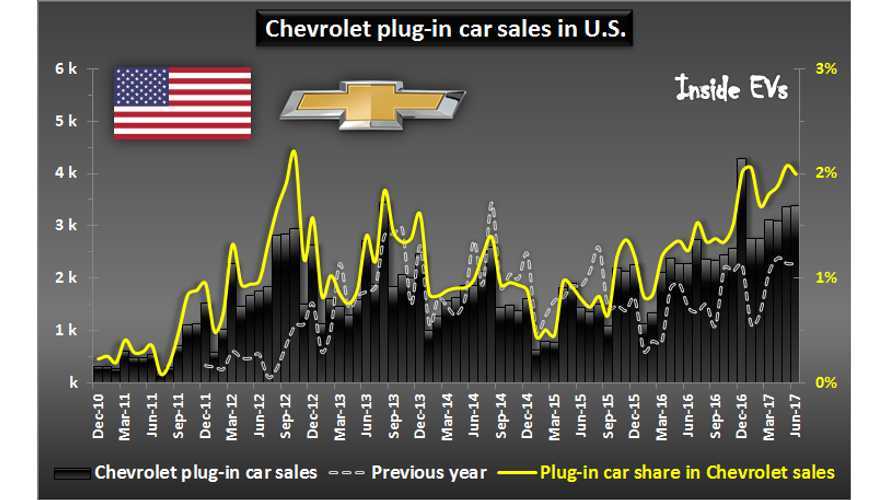 When we take a look at Chevrolet's plug-in electric car sales since the Volt's introduction way back in December 2010 (long term graphs FTW), it turns out that that the record peak market share of 2.2% for plug-ins inside the Chevy lineup was reached in October of 2012 in the US.

Besides the Volt, the Chevrolet brand today also offers the Bolt EV (since December 2016), and had also featured the Spark EV on a somewhat limited basis (from June 2013 through 2016).

As we see looking at the chart (above), the first few 4 years of plug-in sales didn't translate into significant ongoing progress for Chevrolet.

But there is a new obvious upward trend that has appeared since the introduction of next generation Volt (October 2015), followed by the all-new Bolt EV.

The pair combined to set a new sales record of 4,287 deliveries in December 2016, and has kept Chevrolet back in the area of 2% share for plug-in sales ever since.

We suspect when the Bolt EV becomes available nationwide in August that the rising trend will continue, and new market share records will be set throughout the end of the year.

Whether or not that number can pass 3% based just on the strength of the Bolt EV is an open question. GM has promised at least one other model using the Bolt EV's long range platform - it may be this model that is needed to truly put a dent in overall Chevy sales, and pass 5%.