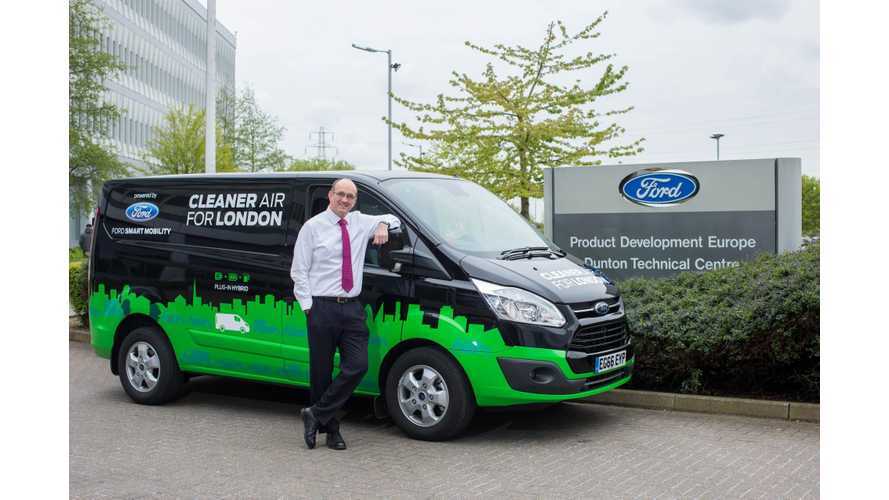 The first five fleets have signed on to participate in Ford's new plug-in hybrid van trial project in London, which is scheduled to get underway this Fall.

In total, Ford intends to test 20 vehicles over a 12-month period, prior to introducing the PHEV van on the European market (unfortunately, no U.S. version is planned at this stage).

Ford still has yet to reveal the all-electric range, but has stated that it will be enough for the majority of inner-city trips; which means to us that likely we won't be all that excited about the offering when it finally comes to market.

But then again, more EVs in the commercial space is never a bad thing.

The project, supported by Transport for London, features a 12-month trial of 20 new Ford Transit PHEVs that reduce local emissions by running solely on electric power for the majority of inner-city trips. Equipped with range extenders, the fleet is not limited by battery range, making them capable of the longer journeys that may be required by businesses and ‘blue light’ services.

The participating fleets represent a cross-section of city-based businesses which will integrate the Ford Transit PHEV vans into their day-to-day operations. Using a Ford telematics system, each Transit PHEV will collect data on the vehicles’ financial, operational and environmental performance to help understand how the benefits of electrified vehicles could be maximised.

The five fleets include the Metropolitan Police with two Transit PHEV vans: one marked for second response to traffic accidents and one un-marked as a forensic support unit. In addition, Transport for London will use three of the vans for freight duties.