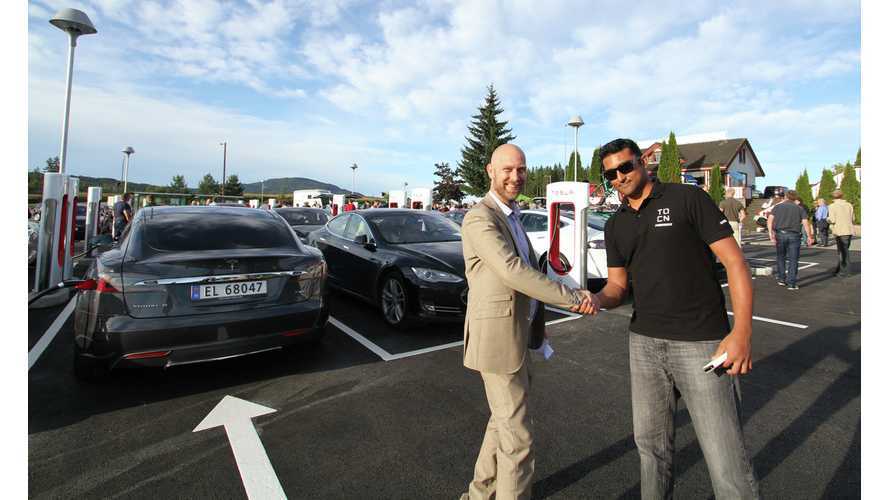 What does all this Supercharger growth mean for Tesla? The experts at EverCharge*, who specialize in electric vehicle charging for fleets, believe that Tesla is at a distinct advantage over other automakers.

EverCharge notes that Tesla's "biggest is that they have a 10 year head start on all other manufacturers... Tesla realized early on that it's not just about building vehicles it's about a completely new experience, one that is not married to traditional vehicles  already have mechanics, gas stations, and a whole host of services that make up that ecosystem, many of which are not owned or operated by the builder."

"What Tesla realized was they needed to build out this ecosystem on their own as too often third parties were the reason people were not enjoying their vehicles. Due to this Tesla now has thousands of charging stations installed that only Tesla owners can use and that means they can completely optimize and standardize that experience... can make a world of difference."

So let's take a closer look at Tesla's Supercharger stations. "These stations were not only strategically placed to ensure drivers could make nearly any city to city drive with ease but also designed to minimize the time spent at the station. Tesla Supercharger stations deliver 145kW of power only taking ~45 minutes to charge the car completely. Compare that to the average DC fast station which charges anywhere between 24kW-50kW (only a small few even reach 130kW)."

Non-Tesla electric vehicle (EV) drivers have to work harder to find chargers as they're often "randomly placed and in short supply. This means driving from say Toronto to Montreal which typically takes 5 hours in a Tesla could take as much as 9 or more in a similar non-Tesla EV simply because DC fast chargers are hard to find, have inconsistent speeds and charge far slower than the Tesla Supercharger. All this adds up to a big headache for non-Tesla drivers. Sure, there are plenty of EV options but if you’re not driving a Tesla you are probably not fully enjoying the experience."

The world's largest EV parking/charging garage at at Varma’s head office in Salmisaari, Helsinki (Finland) is set to open this summer.

And while Tesla works quickly to mark its Supercharger territory, most observers "don’t fully understand exactly how big of a play this really is. Essentially it's a massive land grab and the competition just let Tesla take all the prime real estate. Tesla Superchargers pump out 145kW of power a piece and that's a lot of power being pulled into a particular area. With all that power it can be exceptionally expensive and difficult to build these stations, and Tesla has gobbled up a lot of the easier (read: less expensive) places to build."

In addition, "it's not as simple as building a competing charging station across the street, in fact, that might be nearly impossible. Bringing in huge amounts of power into a small area like that would require a small power substation... essentially makes it financially infeasible for the competition to build there. Basically, this means that nearly all the land you see around a Supercharger station is totally unusable by any other competitor."

This gives Tesla a distinct advantage. "It's just too expensive and difficult to build in that particular location... Now they are forced to find less desirable locales to build out their networks and that could come at the cost of millions per station."