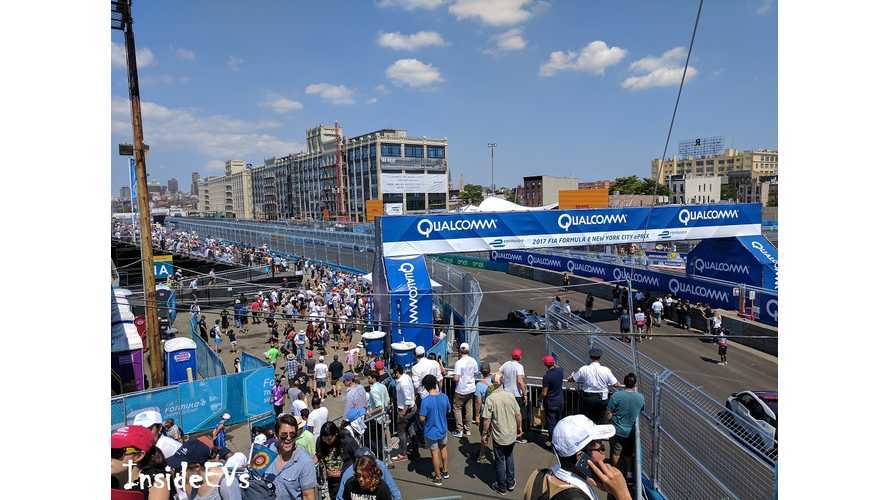 The Freedom Tower in lower Manhattan served as a backdrop to Brooklyn's Formula E Event this weekend.

When I first learned that the FIA Formula E electric car racing was coming to New York I was both excited and a little concerned. I was excited because living in New Jersey, I was finally going to get the opportunity to experience the electric race that’s been gaining popularity since its inaugural season in 2014 -2015.

The Grandstands were packed with a capacity crowd.

However, knowing New York, I was also a little concerned about finding a location that would be suitable to hold the race and accommodate the crowd. It turned out that my concerns were unwarranted.

Bonus:  Video recap and race highlights from both races in Brooklyn can be found below

The Brooklyn Cruise Terminal worked out fine to hold the 1.21 mile track, spectators and the Allianz eVillage, which was a family-friendly entertainment area.

That’s not to say a larger area wouldn’t have provided a better fan experience, but this being New York City, there really aren’t too many options without closing down streets and creating a traffic nightmare.

As for the race itself; WOW. It was really better than I even expected and I highly recommend that anyone that has the opportunity to go to one of these races, do so. Video (below): Start of the race on Sunday, 7/16/17

If anyone thinks Formula E is less enjoyable to watch than conventional Formula 1 or even NASCAR, I’d just recommend you to go experience it for yourself. It’s not quite as fast, as there aren’t the long straightaways for the cars to really get up to high speeds, but the entire race was very exciting, right up to the finish.

This might seem counterintuitive since electric cars are notoriously quiet, but one of the coolest parts of the race was the sound. The jet-engine sounding electric motors are mesmerizing, and you can also hear the tires screeching around the turns, something you can’t usually hear in conventional racing because of the loud engines. To me, it really seemed like the right amount of loud noise. Enough to know you were at a race, but not so much that your ears are ringing for a few hours after the race is over.

The event was really a win for everybody involved. Formula E got the massive exposure of being on the big stage of New York City. Brooklyn got thousands of visitors staying at hotels, eating and partying at restaurants and bars. But the biggest win in my opinion was the area residents getting to see electric racing. I was listening to the comments of the people sitting around me and they were all extremely impressed and even a bit surprised at how competitive the racing was.

It kind of reminded at how Tesla changed a lot of people's minds and broke down barriers by making a long-range, high performance all electric sports sedan while everyone else was making slow, short range economy cars as EVs. I believe over the weekend that Formula E changed a lot of New Yorker's minds regarding what electric drive is all about.

Jaguar was one of the first OEMs to join Formula E, and had an entry this season. They also brought a concept I-Pace EV to display this weekend in Brooklyn. The I-Pace will be available for sale in the second half of 2018.

Video (below): Race highlights from Sunday's Formula E in Brooklyn (race #2 of the weekend doubleheader)

DS Virgin Racing's Sam Bird claimed his first ever Formula E victory on Saturday, and then followed it up with a sweep of the weekend series with a win on Sunday. Final results from the weekend series in New York City are as follows:

Video (below): Race highlights from Saturday; s Formula E in Brooklyn (race #1 of the weekend's doubleheader)
++