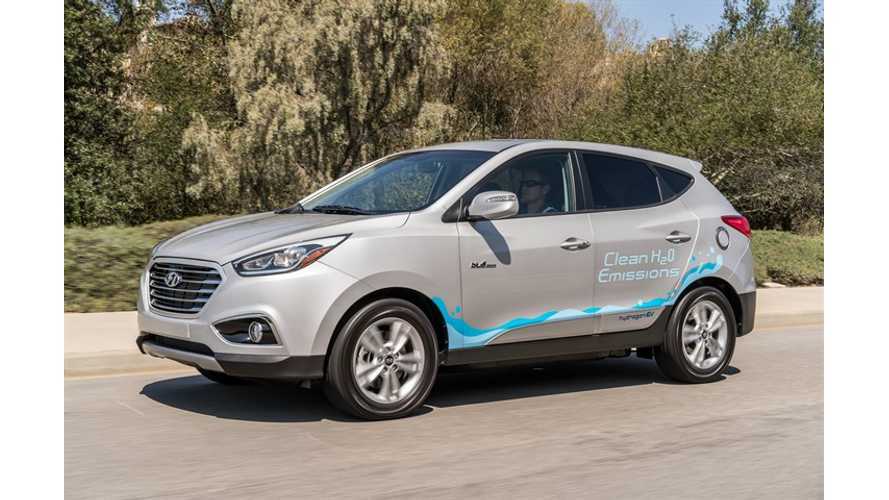 Hyundai celebrated Earth Day 2017  by announcing its Tucson Fuel Cell's milestone of achieving more than two million miles on the roads and highways of both Southern and Northern California.

The South Korean company tirelessly calls its hydrogen fuel cell SUV the "first mass-produced fuel cell car", but we feel a bit strange regurgitating that talking point, and the U.S. delivery counter since 2014 stands at just 140 units; at least the Toyota Mirai consistently achieves around ~100 sales per month of late, and ~1,400 sales since October of 2015.

In theory then, the average mileage stands at just below 14,000 miles per vehicle.

The Hyundai Tucson Fuel Cell (aka ix35 Fuel Cell) has range of up to 265 miles.

"In celebration of Earth Day 2017, Hyundai Tucson Fuel Cell drivers have again surpassed an important threshold, accumulating more than two million miles on the roads and highways of both Southern and Northern California. These fuel cell CUVs have emitted only clean water vapor, and by so doing, have replaced approximately 760 tons of CO2 emissions that would have been emitted by vehicles of similar size and capability. Hyundai has delivered more than 140 Tucson Fuel Cell crossovers since its introduction as the first mass-produced fuel cell in the U.S. market in 2014."