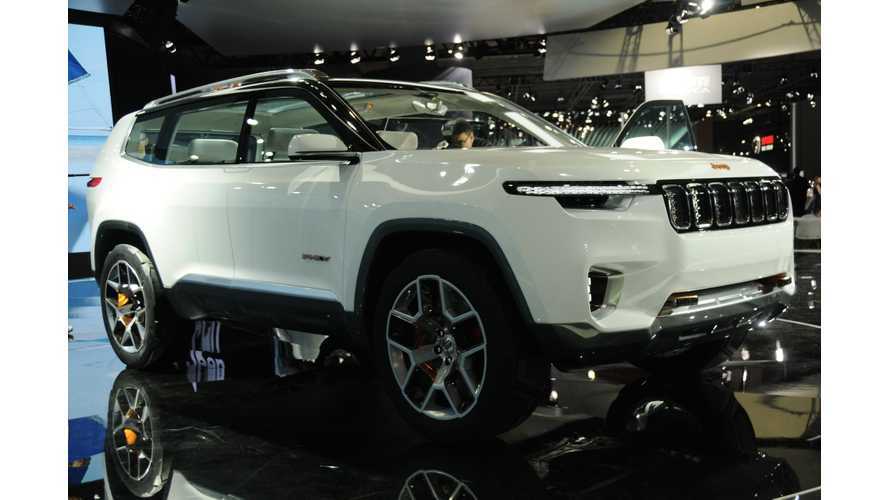 Here we have introduction of the first plug-in hybrid Jeep , the Yuntu, which is intended for the Chinese market (as it has made its debut from the 2017 Shanghai International Automotive Show).

While initially showing off a plug-in Jeep in China might seem odd, it also may just be a warm-up for a similar product's debut in the US, as the 7-seat SUV you see here is likely production bound for America in some way for next year.

In other words, the Yuntu shown today is actually an off-shoot of the US development program, and has been translated to an IP sharing project under the GAC-Fiat joint venture in China; and as Auto Shanghai is a major show for the brand in the region, it is breaking cover there first.

Of note: Also check out the deep photo gallery of the Yuntu below.

Why do we think this Jeep model shown in China this month is headed to US production?

Three years ago the company offered a Nissan-esque "five year" business plan to investors that had a couple curious notes we picked up on.

Wait, what is that there for 2017 production again? A full size crossover for 7 you say?

So, this Jeep Yuntu would seem to fit that bill.

Of course to be fair, FCA could have another 7 seat, plug-in utility vehicle concept waiting in the wings somewhere to introduce for this Fall's US autoshow season.

...but that seems unlikely from what we have seen out of the company since the Fiat takeover.

Whichever road FCA will choose for the electrification of the mystery "full size crossover", lets enjoy the live photos and videos of what could be.