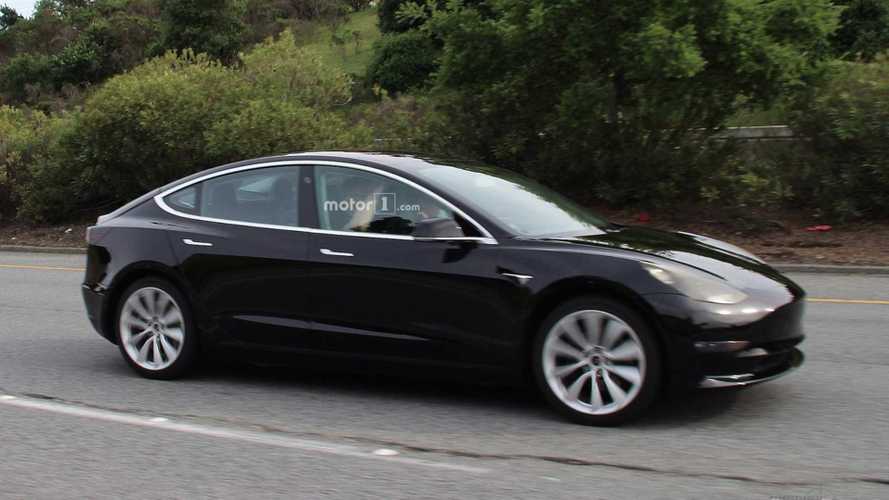 The Tesla Model 3 is not out of the ordinary, nor is it predominantly flashy, and this may be another reason it will appeal to the masses.

Most of the talk lately has been about the Model 3 interior. This is because there is still much that we don't know, and what we do know is that it will be basic. But, this is to be expected of a mass-market compact sedan that costs substantially less than its larger siblings. Most of the exterior attention as of late has been pertaining to how much the production candidates, and now the first production model resemble the original concept (or not).

Let's digress from both of these conversations and just think of the Tesla Model 3 in relation to other compact sedans. Sure, you can find resemblance to a Porsche or an Audi, but really, to many people the Model 3 looks much like any other affordable, sporty compact sedan. Albeit a bit sleeker and sexier, but it's definitely not radical, futuristic, or outright bizarre. These are some adjectives that people have associated with the BMW i3, the Nissan LEAF, and even the Chevrolet Bolt.

Tesla was thinking ahead when it came up with the design for the Model 3. In order to follow company suit, it has to look somewhat like a smaller Model S, but the priority was to make a mass-market vehicle to suit buyers that previously drove the likes of the Toyota Corolla, Hyundai Elantra, Kia Optima, Chevrolet Cruze, Mazda3, and Honda Civic, all while also appealing to those who prefer to (and can afford to) step up to cars like the BMW 3 Series, Audi A3, and Mercedes C-Class.

The price range of the Tesla Model 3 falls more in line with the latter German luxury compacts, but if you factor in that most of the extra cost is associated with the battery, and rebates will play a part, the car itself is more along the lines of an affordable compact, closely paralleled by that of the Mazda3.

The Mazda3 obviously shares design cues with the Model 3. Franz Von Holzhausen, Tesla's chief designer worked for Mazda before moving to Tesla. While he didn't design the most recent Mazda3, and hasn't for the past several years, his concept still remains.

In general, Tesla's vehicles  don't look extreme compared to other cars on the road. Exterior features tend to stand out in beauty, rather than being truly unique or obtuse. Of course, there are the exceptions like the Model X's falcon wing doors, and the "EV" front end, but the cars fit right into the mix. Some may argue that they can always spot a Tesla coming, because it looks so different, but perhaps it's because most of us don't see them that often.

Holzhausen has focused on serviceable, practical, versatile, scalable, and minimalistic, all while keeping the "sexy" part of the equation. Isn't that what many automakers are hoping for in their compact sedans? We would argue that this is surely the case with the Mazda3 and the Honda Civic, as well as the BMW 3 Series, among others.

Tesla doesn't use model years, and doesn't plan to redesign its models as often as traditional automakers. Its vehicles are built to be future proof, with design cues that will live on, and regular updating happening via over-the-air updates.

Aerodynamics play a key role in most all vehicle development these days, and this is especially true with long-range electric vehicles. It seems soon more and more cars will begin to look similar, as advanced aerodynamic design is taking greater precedence.

Some 400,000 pre-paid reservations and a literal global frenzy over the upcoming car is proof enough that Tesla has succeeded with the Model 3's simple, sexy, "normal" facade.