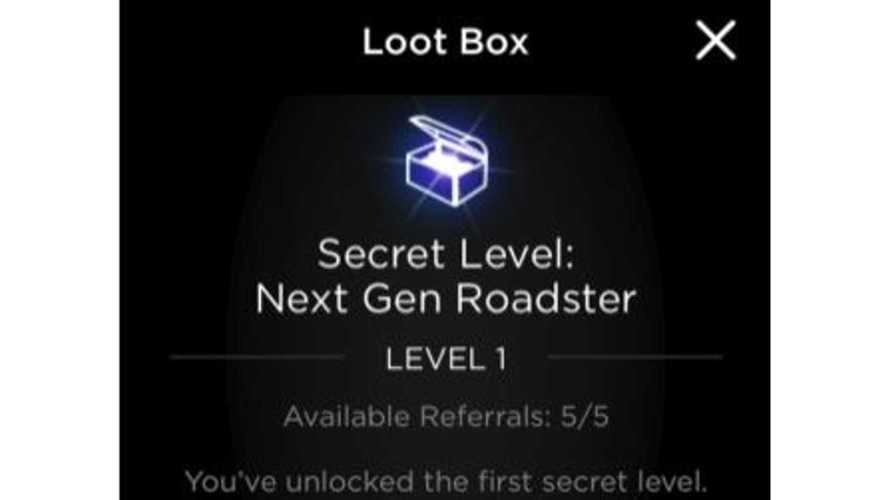 Tesla's Loot Box can get you a rather sizeable discount on the next-generation Tesla Roadster, provided you can find your way into its secret confines.

Tesla's referral program now contains a secret area where it's been discovered that discounts on future vehicles are part of the Loot Box prizes. The actual wording reads:

“You’ve unlocked the first secret level. Refer 5 more friends for the ability to purchase a Founder’s Series next gen Roadster at a 10% discount. Unlock new levels with every 5 referrals for an additional 2% off per referral and amazing adventures that money can’t buy.”

Per Tesla's instructions, if you get enough referrals, a Founder's Edition of the next-generation Roadster could be yours for FREE!!!

"According to language found on the app’s Secret Level screen, referrers are eligible for a 10% discount off the price of a next-gen Roadster for every 5 qualifying referral sales they make. In essence, existing Tesla owners making 50 or more referrals should be eligible to a free Founder’s Series next generation Roadster. Not a bad deal for Tesla considering the referrer would have grossed at least $4 million in sales for the Silicon Valley-based electric car maker."

Prior to this update to the referral program, a limit of 5 referral was in place. Now, it seems that beyond those 5 referrals, you enter the secret realms of the Loot Box, where all sorts of awards may be possible. Remember, this is only Level 1 of the secret (hush, hush) area we are seeing. What could higher levels possibly offer?

The next-generation Tesla Roadster is still some 3-plus years away. It'll go Maximum Plaid and will be a convertible, according to Tesla CEO Elon Musk.