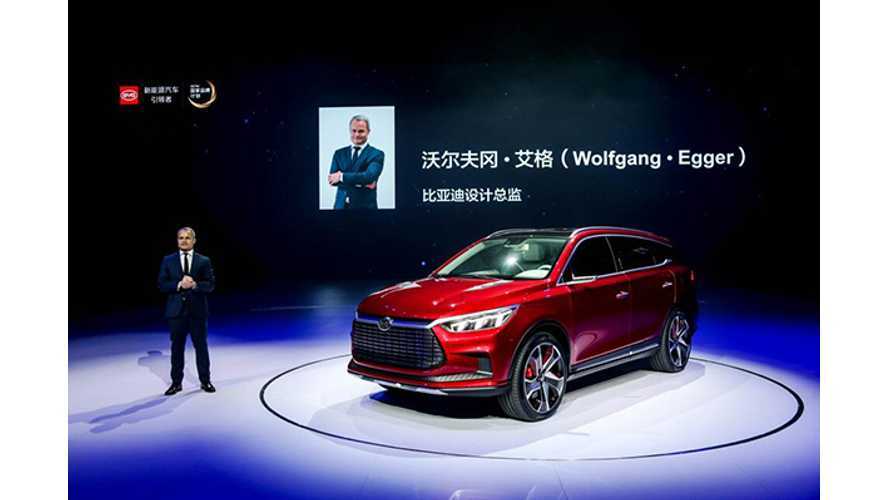 From this year's Shanghai Auto Show, BYD has unveiled a new electric vehicle concept vehicle.  This time, the ‘Dynasty’ also heralds new design language for the company, and was developed by a team led by Wolfgang Egger (a former Audi designer), who was brought in to be BYD's new Design Director.

We hope to learn more about technical details of the new SUV shortly, but other than taking the wraps off, BYD has remained tight-lipped so far.

One thing we know, if BYD decides to launch volume production of Dynasty (and we see no reason why they would not in looking at the concept on stage) for sure we can expect long-range.

"BYD is preparing to make an even greater push internationally by investing in world class technology and expertise that advances its vision of creating an eco-system of quality new energy products. The five billion RMB SkyRail monorail that was launched last October, the appointment of Hollywood actor Leonardo Dicaprio as brand ambassador in China for new energy vehicles, along with the recent hiring of two European automobile heavyweights underscores the company’s strategic global expansion."

“The trend to go electric is already irreversible. But where is the next growth area? There’s no doubt that it will be in consumer vehicles, most of them plug-in hybrid models.”

“Joining BYD provides an opportunity to help a young brand develop its design DNA as it looks to expand its global footprint. This concept vehicle will take BYD’s consumer vehicles in an exciting new direction, with design cues like its dragon-inspired exterior drawing inspiration from China’s rich cultural heritage.”

Song EV300: Further news is also a refreshed BYD Qin EV300, which was especially improved on the interior, as one can note in the photos below.