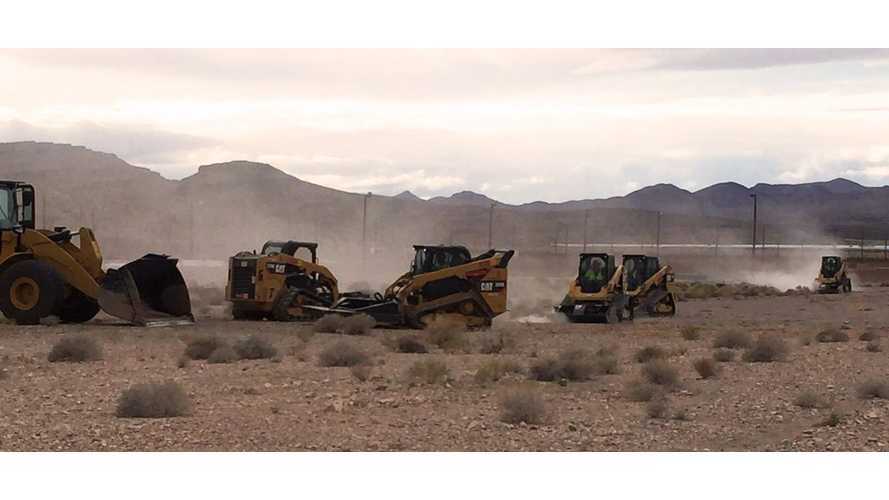 If one has been following the long and sordid tale of Faraday Future, and its grandiose North Las Vegas production facility dreams, it should come as no surprise that the start-up has officially scrapped plans for the facility on Monday.

Faraday Future CFO Stefan Krause said the decision to halt production was a business strategy, with the company making a statement (below) that it will now instead look for an existing facility to produce - uh, whatever it will produce.

"We at Faraday Future are significantly shifting our business strategy to position the company as the leader in user-ship personal mobility -- a vehicle usage model that reimagines the way users access mobility. As a result of this shift in direction, we are in the process of identifying a manufacturing facility that presents a faster path to start-of-production and aligns with future strategic options."

Interestingly, this "new" future existing location is reported to still be in Nevada or California, and could require just $80 to $100 million to set up (if Faraday Future could find such funds) as opposed to the ~$1 billion plus for the original Nevada factory.

There was no word on the status, or new production timing for the FF91 electric supercar (which recently completed Pike's Peak in record time in the now somewhat ironic "production car" class).

Although the company says they have the majority of the equipment necessary to build the EV, but that it now needs a place to store the equipment and set up the line (one assumes they will also need some working capital to pay for parts and start-up costs, as its unlikely any suppliers will be extending them credit).

Faraday today states that they "...are in the process of identifying a manufacturing facility that presents a faster path to start-of-production and aligns with future strategic options", but it also doesn't actually say the words "FF 91" in that statement either.

To us reading between the lines, it kinda sounds like the FF 91 won't be happening anytime soon.  Or maybe ever.

The first clue there was trouble at the 900-acre site, located at the Apex Industrial Park in North Las Vegas, was when the company pulled a little PR stunt by having a dozen rented Bobcats (photo above) zip around the vacant property "clearing the way for our manufacturing facility in North Las Vegas".

Since then it has been a steady stream of lawsuits over unpaid bills and execs leaving the company (here, here, here, etc.), and the cancellation of a companion California facility, and also the "downsizing" of the now cancelled Nevada plant, from ~3 million sq feet to 650,000.

Over that time, the company has reportedly sought ~$1 billion in new funding as founder Jia Yueting's finances have crumbled (just last week a Shanghai court froze more than $182 million of his assets), and after only reported netting 60 paid reservations initially for its FF91 electric car (out of 64,000 unpaid ones).  Mired in bad press, and with a rocky history, that money raise apparently didn't go so well.

In a statement to Business Insider, a senior level Faraday employee said, "We are in a precarious situation right now. The generous funding we had in the past is no longer here."

Steve Hill, Director of the Governor's Office of Economic Development made a statement on the matter (below), saying that Faraday has paid all the applicable taxes on the land, and that no state incentives had been yet paid to Faraday Future.

Faraday Future has informed the Governor's Office of Economic Development (GOED) that it has put the construction of its factory in North Las Vegas on hold.

Throughout the process of working with Faraday, the state recognized both the opportunity a large manufacturing facility could provide as well as the inherent risk associated with a start-up company attempting this endeavor.  In order to completely protect the citizens of Nevada from risk, the agreement with Faraday requires the company to fully invest a minimum of $1 billion in order to receive any state incentives.  In accordance with this agreement, Faraday has paid all taxes owed to a Trust Fund established by the state.  The agreement with Faraday held Nevada’s citizens harmless from the risk associated with this project.

Meanwhile State Treasure Dan Schwartz, who has been screaming "wolf" since the very beginning on Faraday Future and its finances, took a bit of a victory lap with his statement:

“We all make mistakes, but this one was obvious. Long after it became apparent that ‘a mysterious Chinese billionaire’and Faraday Future could never build a $1 billion electric auto plant, Nevada state officials continued to insist that Faraday Future would magically create 4,500 jobs in North Las Vegas. Now, Jia Yuteng, Faraday’s funding source, has had his assets frozen by a Shanghai court and is under increasing scrutiny in China for what amounts to fraud; the automobile plant is just a pile of sand in the APEX Industrial Park; and, the promised jobs are yet another mirage in the Southern Nevada desert.

“The only good news is that the Treasurer’s Office continued to press for financial information from Faraday and refused to issue the $175 million bond without detailed information.

“Welcome to Nevada, where good government takes a back seat to bad deals.”

“Throughout the process of working with Faraday Future, my office, GOED and the Legislature made it a priority to ensure that Nevada’s interests and taxpayer funds were entirely protected. The agreement between the State and the company required a trust fund to hold any earned abatements until the company achieved a $1 billion investment.

While I am disappointed in today’s announcement, I can say with certainty that Nevada’s citizens were held harmless financially. The State of Nevada continues to perform as one of the top economic states in the nation, drawing the interest of companies from across the county and the globe. Additionally, I know that APEX has the potential to become a world-class destination for advanced manufacturing and distribution centers and will be a catalyst in transforming Southern Nevada.”

Wonder what had been done at the facility since Faraday took over, here is an itemized list prepared by Faraday and the Nevada Governor’s Office of Economic Development (we aren't so sure about item #1)

1. Capital investment of $160,000,000 2. Completed all site demolition work. 3. Graded and moved over 2.5 million cubic yards of earth on site 4. Completed installation of the underground sewer 5. Completed grading (with the exception of the north and south channels not required for this phase) 6. Certified that the pad for the factory building is at grade and ready for the start of foundations 7. Established on-site offices for both Faraday Future employees and the general contractor 8. Leased additional interim office and meeting space in the city of North Las Vegas.

"We at Faraday Future are significantly shifting our business strategy to position the company as the leader in user-ship personal mobility -- a vehicle usage model that reimagines the way users access mobility. As a result of this shift in direction, we are in the process of identifying a manufacturing facility that presents a faster path to start-of-production and aligns with future strategic options.

Accordingly, we have decided to put a hold on our factory at the APEX site in North Las Vegas. As the land owner, we remain committed to the buildout of the APEX site for long-term vehicle manufacturing and firmly believe North Las Vegas is an ideal place for us to be.   We would like to thank our partners in Nevada for their continued support throughout this process: Governor Sandoval and his office of Economic Development, Clark County and Mayor John Lee and the North Las Vegas officials.

More details on Faraday Future’s new strategy will be shared in the coming weeks."

As noted by Faraday Future's statement, they still own the property at the APEX site, but we think it is probably a reasonable assumption that the company is already looking for a potential buyer of the site to finance its now, much smaller, aspirations.