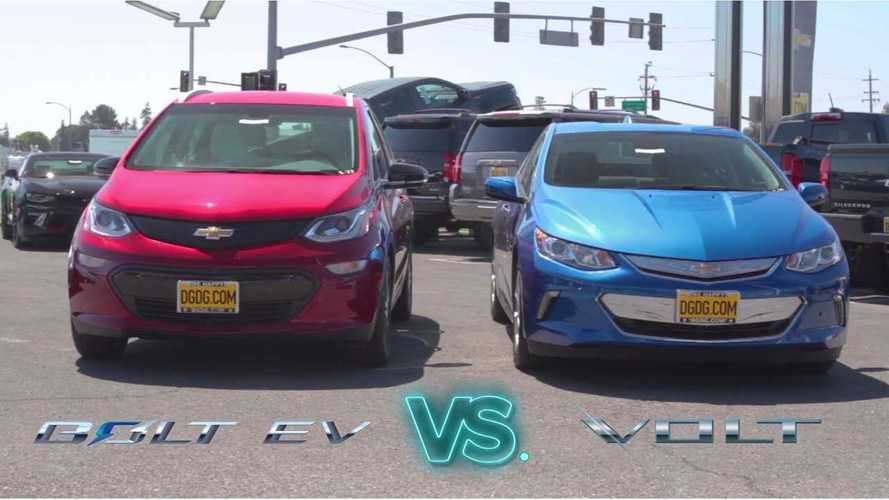 Capitol Chevrolet of San Jose, California gives us a concise and informative compare and contrast take on Chevrolet Bolt vs. the Chevrolet Volt.

This four minute piece breaks down the differences between the two General Motors' plugins, to help you make an informed decision. It takes a look at the cars in five categories: exterior, interior, safety, performance, and charge time. Let's take a look at what the dealership shared.

Obviously as the spot is put out by a Chevy dealer, consider the source, but overall we find the segment to be a sold promo for the cars, and a credit to the advertising department of Capitol Chevrolet.

Though the names can be confusing, there's no confusing the look of the two Chevys. The Volt is more conventional and "sedan-like", whereas the Bolt is taller and looks like a crossover. Both share very similar 17-inch, machined aluminum wheels.

While both cars officially seat five, the Bolt has headroom and legroom to spare. Both are hatchback style vehicles with 60/40 split-folding rear seats. However, the Bolt tops the Volt in trunk/hatch space, at 16.9 cubic feet to 10.6 cubic feet, respectively.

The Bolt and the Volt have Chevy MyLink infotainment systems and digital driver information displays. You can get both with Apple CarPlay and Android Auto, but the Bolt's interactive touchscreen is over two inches larger, and it also offers a wireless charging station.

The Bolt adds 90 miles of range in 30 minutes using a DC fast charger. Fully charging the Bolt takes nine hours when using a 240-volt charging system. The Volt will fully charge in about 4.5 hours with a 240-volt system. If you use a 120-volt plug, it takes 13 hours.