The Tesla Model 3 Means Make Or Break Time For Tesla 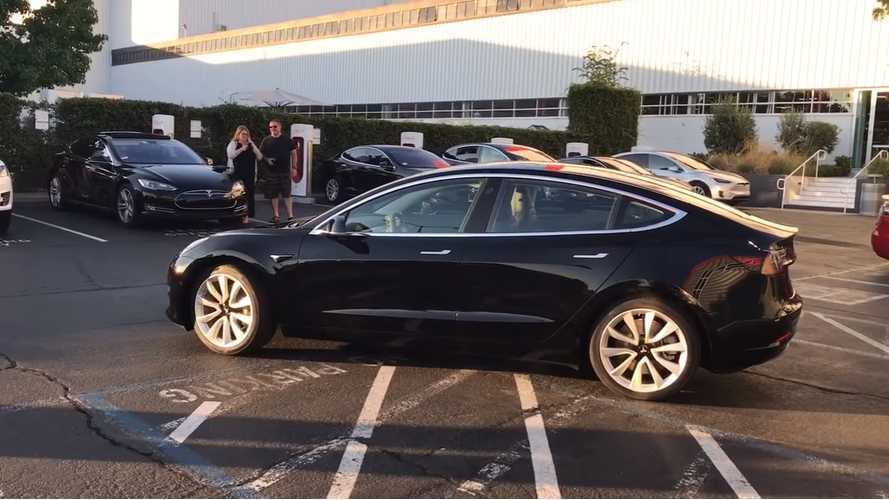 The first production Tesla Model 3 rolled off the assembly line on Saturday, July 8, 2017 at Tesla's automotive factory in Fremont, California, and now it's high time for Tesla to shine.

Tesla has been considered a "startup", a "niche" automaker, a "lifestyle brand", and "tech company" since it built its first electric roadster nearly ten years ago. Tesla CEO Elon Musk has spent years tailoring a master plan that essentially begins with its automaker's first affordable, mass-market, high-volume offering; the Tesla Model 3.

As we draft this piece, thirty more (perhaps 29) Tesla Model 3 vehicles are being built in Fremont and readied for a handover party, which will take place on July 28, 2017.

Full details on the event (and a look at the precious few invites that have been sent out) here.

Following that party, Tesla will begin a long and near-impossible production ramp up that will take place over the next year and beyond. How this all falls into place for the Silicon Valley automaker will likely pave its future, all while changing the future of the global automotive market. Gartner Inc. research director, Mike Ramsey, shared (via Automotive News):

"It is definitely a make-it-or-break-it moment for Tesla. They have to produce a car that has fewer problems than the Model X. If the car comes out with the kind of issues the Model X had, it could be very damaging to Tesla."

However, Ramsey doesn't think that issues with the Model 3 will put Tesla out of business, but whether or not the automaker can make hundreds of thousands of cars in a timely manner is yet to be seen. Some analysts believe that even if the ramp up isn't timely, but remains relatively smooth, Tesla will fare well. Success will help to secure Tesla as a viable force in the automotive world, while problems may fuel skeptics and keep Tesla's insecure image just that. Ramsey continued:

"I don't think anybody actually anticipates that they're going to hit 500,000 in production. There's a huge 'Tesla discount' on that in reality. If they get to 250,000, I think that people would think that is a pretty huge success."

Tesla delivered 76,000 vehicles in 2016. To hit Musk's future estimates would amount to the most miraculous vehicle production ramp-up in history. David Whitson, an analyst from Morningstar projects 400,000 Tesla Model 3 deliveries in 2018 and over 600,000 in 2019. He said:

"(It's) important to keep the hype about Tesla in perspective relative to the firm's very limited production capacity."

Musk's electric car maker has already pushed past some of its early roadblocks and proved naysayers wrong. The Model 3 passed all regulatory approval two weeks early and production started ahead of schedule. However, one vehicle ahead of schedule and some thirty more on time isn't proof of anything yet. Jeff Osborne of Cowen & Co. told clients:

"While it is nice to see Tesla finally hit a stated target on time, we question whether 30 vehicle deliveries essentially built by hand count as 'mass production' and we also are surprised that this 'mass market' vehicle does not have official photos, options, pricing or really any details available."

Despite the very recent successes related to the beginning of Model 3 production, Tesla has been slower with the Model S and X as of late. Some attribute it to the company's focus on the Model 3, while others cited slowing demand. Tesla asserted that a shortage of battery packs was the real issue. Bank of America Merrill Lynch research analyst, John Murphy, countered:

"Blaming lackluster deliveries on production issues may either be disingenuous or indicative that Tesla cannot solve simple production problems that every other major automotive manufacturer deals with on a regular basis."

Others stress that Tesla's direct sales model may not be able to handle huge production growth. Sales are banned in some states and the company doesn't have the support network of legacy automakers. Tesla only has 70 service centers in the U.S., and 20 of them are in California. Analysts also fear that Tesla's Supercharger network won't be able to handle the added strain of hundreds of thousands of Model 3s. AutoPacific analyst, Dave Sullivan explained:

"There's a potential for something to go wrong right now that would affect Tesla more than any other vehicle manufacturer. They do not have the network of support and service that everyone else has established."

Tesla told Automotive News that it is working to increase the number of Supercharger stations and service centers, along with expanding or converting current retail stores to include service centers.

Due to a pre-order flurry that has never been seen before in the auto industry, Tesla has an incredible amount of orders to fill. On top of this, people are still placing orders, and people are already impatient. It will be a long time before many get their vehicles, even if Tesla is able to be timely.

New orders, from those that are just joining the club may not be filled until a year from now or more. These "new" adoptees may not have the level of forgiveness that is expected of early adopters, and their impatience along with any negative press may escalate their expectations. Principal analyst of North America light-vehicle production for forecasting firm IHS Markit, Joe Langley, believes:

"The early customers are far more forgiving, but if you're hypothetically talking about half a million vehicles a year, these are not early adopters. They are not going to be as forgiving of things."