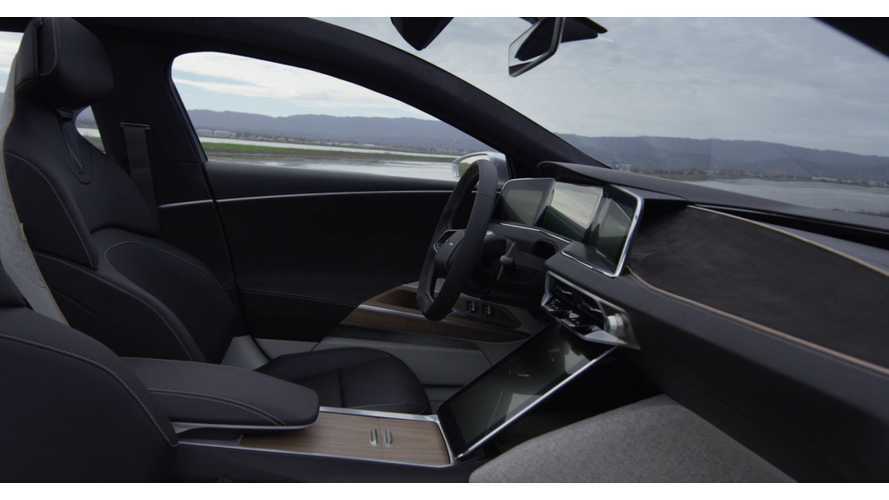 As you can see from the video, the Lucid Air is not only upscale and roomy, it's ultra-luxurious, with space beyond its class.

Perhaps this is because according to Lucid Motors CTO Peter Rawlinson:

“The inspiration for the Lucid Air was drawn from the travel experience of the executive jet, and the key enabler of that is the miniaturization of the electric powertrain.”

That's interesting because Mashable's Raymond Wong just wrote about the Air's space and luxury, after experiencing it firsthand. His words:

"I got a chance to sit — unfortunately, I didn't get to drive or even ride in one on the streets — in the Air at the New York Auto Show and I have to say, it felt more like being in a private jet or in a first-class plane cabin than in a road vehicle."

Having ex-Tesla Model S engineer, Peter Rawlinson calling the shots, provides quite the advantage for Lucid. Rawlinson knows exactly what was "good" about the Model S, and what was lacking. Rather than setting out to build a "Tesla killer," Rawlinson decided that Lucid should pull out all the stops and make this car a true wonder. It's designed to outdo even the best in German luxury vehicles. Rawlinson shared (via Teslarati):

"Some people will compare us with Tesla because it's a luxury EV in that space, and I can understand that comparison. But what I hate is being described as a Tesla killer, because that's just not representative. We want to take our rightful place which exists worldwide, and it's dominated by the Germans."

" is a great product — a landmark — and I was thrilled to be involved with it, but there are certain things it didn't do." (via Mashable)

"Of course you bring knowledge, and experience, but this is really a free-thinking look, and how we can make the next level of electric car, completely uninfluenced by Tesla Model S. This is how we can really take advantage of electrification in a way that product didn't. This is the electric car reimagined from scratch. Uninfluenced."

The Air employs a "sculpted" battery to create additional cabin space. He explained (via Mashable):

"The pack bolts under the car just like Tesla, but the Tesla pack is continuous — a simple prism that runs front to rear. What we've done is sculpt the battery back away, particularly around the rear occupant's feet so it's roomier and more comfortable."

"The battery, the motors, the whole electric power train — we used an imaginative way to create a better vehicle package. They enabled this better package. So we were thinking where do people want to sit? Where would their feet go? Well, their feet should take priorities over batteries , so that drove the shape of the battery."

Inside the Lucid Air -  A look at a few of the displays.

The Lucid Air that Wong enjoyed was the top-of-the-line model,  complete with the panoramic glass, executive reclining rear seats, and massaging front seats. Not to mention the 1,000 horsepower dual-motor powerplant. The base will come with a "normal" aluminum roof, and the rear seats don't recline. But it still offers a ton of room, and is appointed with the finest materials.

The Air won't have autonomous software in place for a number of years, but its engineers are already considering how cabin space will be used "differently" once we don't have to worry about driving. How about a nap in one of the rear seats?

Wong explains some other key features that set the Lucid apart from the Model S, as well as most cars on the road today:

The list goes on and on, and the critical praise for the Lucid Air has been outstanding. Let's just hope that the company can secure the necessary funding to make this all a reality.