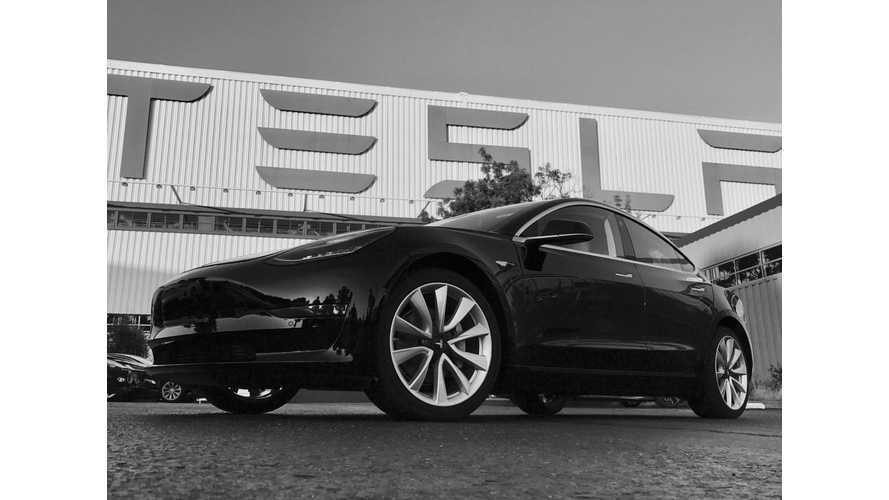 As promised earlier this week, production of Tesla Model 3 #1 is now complete, marking the start of a new era in semi-affordable electric cars.

As June came to an end, Tesla CEO Elon Musk promised there'd be Model 3 news, then this past Sunday announced that the first Model 3 was expected to be completed on Friday, July 7th.

And while we stayed up late on Friday to hear that confirmation, it never came.  Did it happen or not? That was question.

Today we got our answer, and the first Tesla Model 3 has been built!

You can see some of those shots released so far above (out in front of Tesla's Fremont factory).

Late Saturday night, Musk was asked who would get the first 3?  To which the CEO stated that it is whoever puts down the first deposit.  Which in this case, was not Musk.

It's who is first to pay full price for the car. Hard rule. I have first Roadster and X, but not first S.

Ira Ehrenpreis had rights to 1st car as he was 1st to place a full deposit, but gave those rights to me as my 46th bday present. Tks Ira!

As for the first Tesla Model S which isn't in the CEO's collection, that went to Tesla board member Steve Jurvetson, who famously whipped out his wallet at an early Tesla board meeting and filled out a cheque for the first Model S sight unseen, to which Musk stated "Well, I guess you get the first car.”

Of course we will have more pics of the first Model 3 off the line once they are available via Tesla!

Update:  Some pictures taken (Imgur/Reddit via Nan Lin on Facebook) of the Model 3 heading out for the Tesla promo shot above (in color)