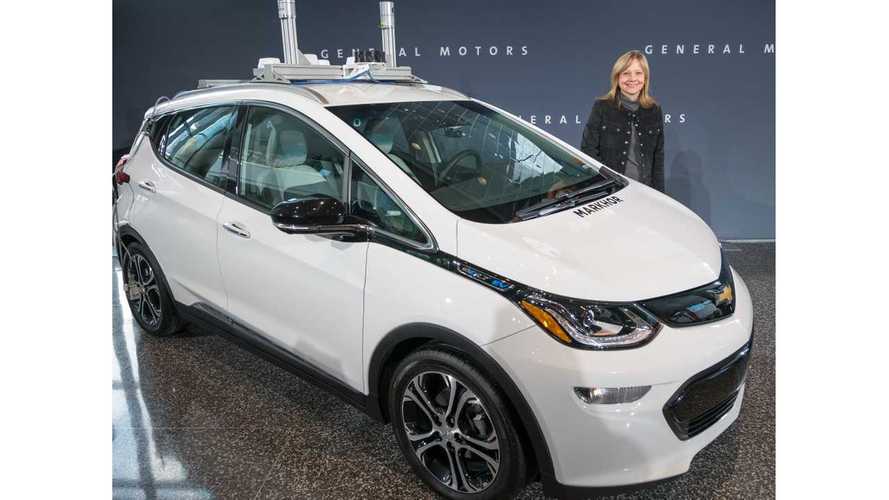 Waymo currently claims the lead in the autonomous fleet race, with about 80 of its vehicles deployed around the U.S. In the next month or so, GM and Cruise Automation will add new radars to at least 300 self-driving Bolts in Detroit, San Francisco, and Scottsdale, Arizona. This will make the autonomous Chevrolet Bolt fleet not only the largest of its kind in the U.S., but also globally.

GM has over 50 self-driving Bolts spread between the three cities thus far. As for the other 27 companies with self-driving cars on public roads in California, the total number is around 89.

IEEE Spectrum received news of this story somewhat indirectly, however, the details add up nicely. To use a radio frequency that's not approved by the FCC, companies have to apply for a Special Temporary Authority (STA).  Japanese Supplier, Alps Electric, recently applied for clearance to test 3,000 of its new Ukaza experimental radars. Alps engineer John Cabigao explained:

“The need for 3000 units is for testing and continuing development of the radar for vehicle use. As this type of automotive product does not yet exist in the market for public consumption, there are a lot of experimentation and testing that needs to be done on our side and with our customer to continue development.”

“Each vehicle will have 10 units so that total number of vehicles tested is only 300.”

Cabigao did not share which company would be testing the 300 vehicles. But, 10 days later, GM filed a mirror STA for use of the Ukaza radar. Even more interesting is that GM asked that the official number of units requested be removed from the FCC report. GM engineer Robert Reagan III wrote in the filing:

“The number of units involved in the experiment can convey business sensitive information to competitors regarding future plans for services and technologies that have not yet been fully developed.”

To further prove IEEE's seemingly obvious discovery, the publication researched Reagan's LinkedIn page. It explains that the engineer's work is to:

"Ensure that our parts can do what they need to do and arrive at the assembly plant on time. For now, those parts are the radar sensors on the Chevrolet Bolt Autonomous Vehicle.”

All of this information applies to the Ukaza short-range radar, though the story doesn't end here. GM applied for the same type of FCC clearance for a medium-range radar supplied by Bosch. Initially, this radar would go in 162 vehicles, based on the information that IEEE obtained. Bosch didn't admit that the radars were for the Chevrolet Bolt, but did indirectly verify the three testing cities by geographical location.

If all vehicles will have the Ukaza short-range radar, and some of the fleet will employ the Bosch medium-range radar as an addition, then 300 autonomous Bolts is the target number. Although if 162 separate Bolts will be tested with the Bosch radar, against another 300 with the Ukaza equipment, then this number could actually be 462 self-driving Chevys.

The FCC still has to move forward in approving the STA requests, which is expected to happen prior to next month.