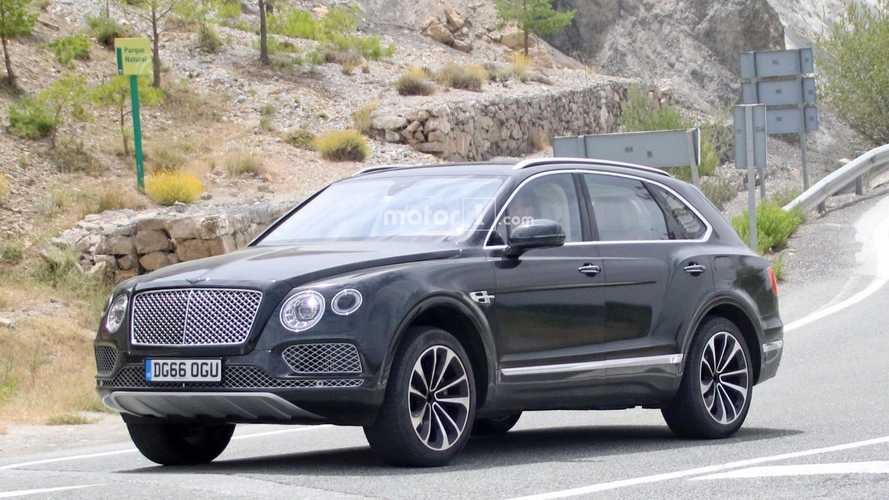 The entire Bentley lineup will be electrified in the years to come.

The Bentayga is not only Bentley’s first production model to run on diesel, but it will also be the first partially electrified. It will happen in 2018 when the folks from Crewe will introduce this, the Bentayga plug-in hybrid. Spied undergoing testing in Spain, the prototype looked virtually the same as the conventionally powered model, but with one exception: a fuel cap on the rear fender on the SUV’s left side. That’s where the charger will be plugged in to feed the batteries with electricity.

A quick search of the license plate with U.K.’s Driver and Vehicle Licensing Agency reveals the Bentayga was registered on September 2016, but that’s not really very important, is it? What matters more is that the same DVLA page also shows the prototype had a 2995cc engine under its hood. If the displacement seems familiar, that’s because the Porsche Cayenne S E-Hybrid has the exact same capacity, though chances are the powertrain will be modified compared to the current setup inside Stuttgart’s SUV considering a new Cayenne is right around the corner.

It should be mentioned it's not the same V6 engine powering the Panamera 4 E-Hybrid where the mill has a 2.9-liter (2894cc) configuration and comes with a pair of turbochargers whereas the 3.0-liter in the outgoing Cayenne Hybrid is supercharged. As a side note, Porsche has already announced the next-generation Cayenne will be blessed with a 671-hp hybrid powertrain borrowed from the Panamera Turbo S E-Hybrid, but it’s not known at this point whether the Bentayga will get it as well.

The hybrid Bentayga is only the tip of the iceberg in terms of electrification as Bentley has promised all of its models will get a second fuel cap in the years to come. The all-new Continental GT is on the verge of making its debut and is going to receive the PHEV treatment as well.