Report: Tesla Projected To Be U.S. Plug-In Sales Leader Through 2021, But VW Second? 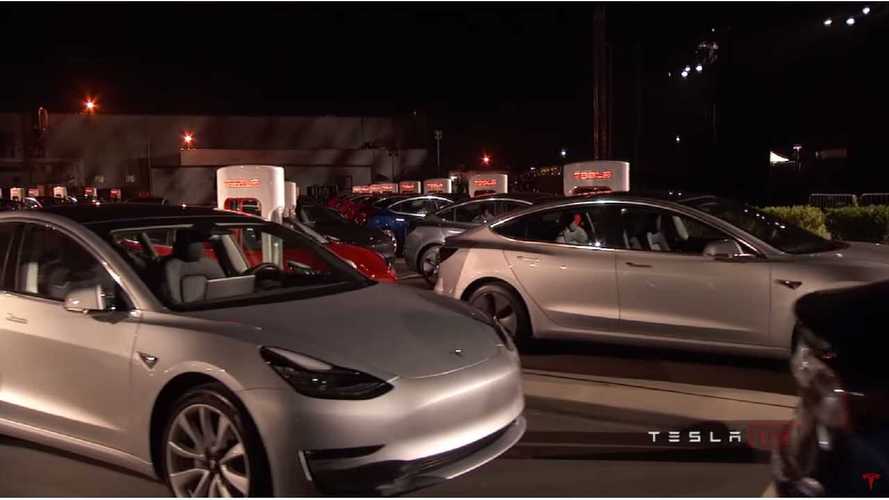 More than a few Tesla Model 3 sales will made over the coming years!

Due largely to projected Model 3 sales, Tesla is expected to have the highest volume of U.S. electric vehicle sales through 2021.

With the introduction of the Tesla Model 3 in July (details), including the delivery of the first 30 units (watch here), Bloomberg New Energy Finance believes that the electric automaker will easily hold the U.S. plug-in electric vehicle sales lead through at least 2021.

A sentiment, which if anyone has been following the plug-in sales for the US over the past few years (full historical stats listed here), should be fairly easily to agree with.

"The automaker led by Chief Executive Officer Elon Musk will emerge as “the stand-out” in total cumulative deliveries through 2021, reaching nearly 709,000 vehicles, according to BNEF’s Long-Term Electric Vehicle Outlook..."

"Tesla is projected to pull away from current leader General Motors Co., which may slip behind Volkswagen AG’s aggregate sales of plug-in hybrid and fully electric autos in four years’ time."

"While BNEF expects Tesla, VW and GM will lead the EV charge in 2021, the research group owned by Bloomberg LP predicts at least three other automakers will have also surpassed the 200,000 cumulative sales mark in the U.S. by that year. After crossing that threshold, buyers are no longer eligible for the full federal $7,500 tax credit toward purchases of vehicles from those manufacturers."

With Tesla projected to be the clear leader, the question is which automaker will be in second place? Believe it or not, BNEF predicts that Volkswagen will go from relatively few sales today, all the way up to the number 2 spot by 2021. This is based on several promised EV launches from VW in the coming years.

"The prediction BNEF settled on that Volkswagen could climb to the No. 2 spot by 2021 was the “the most contentious” of the research group’s projections, McKerracher said. The German automaker doesn’t yet have the same presence in the U.S. market as other electric-focused automakers, though the opportunity is there for the company to rank among the leaders based on all the vehicle launches it’s announced."

We would say "No kidding the decision was contentious", as it borders on the ludicrous in our opinion.

While VW may eventually take the #2 spot in the future, but we can find almost no scenario it can get there by 2021; even recent VW press releases are touting the arrival of it major plug-in offerings AFTER 2021 - like this week's announcement that the ~270 mile I.D. BUZZ microbus will arrive in 2022.  Even, the first major EV for the brand - the I.D. Sedan doesn't arrive until 2020, and the crossover I.D. Crozz in ~2021.

If we are talking about total plug-in sales, we'd project Tesla (1), Nissan (2), Toyota and General Motors to all be in front of VW in 2021.  For pure EVs, it has to be Tesla then Nissan.

Like all forecast reports, we'll find out in four years' time if Bloomberg (and our own) predictions hold true.