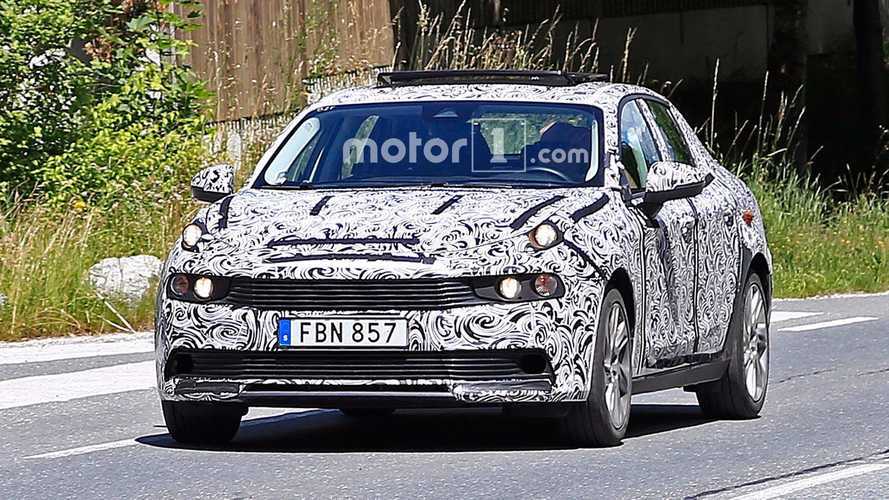 This sedan shares a platform with the next Volvo S40.

The Geely-owned electric-focused brand Lynk & Co has been spied testing its 03 sedan on European roads. In contrast to the previous test mule, this one drops the body cladding and switches to swirling camouflage.

This example exposes the 03’s odd lighting arrangement. A pair of lights sits on each end of the grille, and headlights also stretch up the rounded hood. In profile, the four-door looks like fairly conventional sedan. The design should maximize headroom for rear occupants, though. At the rear, L-shaped taillights dominate the design and slice into the trunk. An exhaust outlet pokes out of each corner below the bumper, and a tiny diffuser is in between them.

Like the Lynk & Co 01 crossover, the 03 rides on Volvo’s CMA platform, and the sedan reportedly borrows lots of parts from the next-generation S40. There are no official details about the powertrain at this time, but the four-door allegedly has a turbocharged 1.5-liter powerplant with hybrid assistance. An EV version is in the sedan's lineup.

These photos don’t provide a look inside the 03, but the concept features a high-tech cabin with a digital instrument panel and large infotainment display. A mix of leather, Alcantara, and metallic trim makes the interior look luxurious. Rectangular vents add visual interest along the vehicle's dashboard.

The Lynk & Co 01 CUV will go on sale in the fourth quarter of 2017 in China, and the 03 will join the brand's lineup later. All of the automaker’s vehicles will come with complementary wireless data use and a lifetime warranty. The firm will also aim to bring its vehicles to the United States and Europe in 2019.